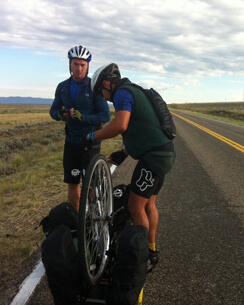 Flats, gnats - all part of the ride

Last July, new college grad John Windsor and a buddy set out from northwest Oregon for a traveling adventure—unusual perhaps, for the distance of the trip and a willingness to bicycle mountains. The friends pedaled some 4,500 miles cross-country. They had strength—they’d been college athletes—and a good mind set.

But Windsor brought additional resolve to the mix. Watching a relative suffer with an eating disorder, and the cloud that it tethered over his family, made a deep impression on Windsor. So when he and close friend Jonathan Zorn planned their trip, they felt right in calling it Cycling for Eating Disorders, a Trip to Save Lives.

On his website, Windsor described the change in his thinking: “… it seemed absurd that such a good, beautiful person could not see the positives in her body or her life…I’d assumed her problem was as easy to fix as lifting the fork to your mouth more often. However, after my initial ignorance…I began to understand the struggle and realize the sincerity of her problem. As (anorexia and bulimia) became more pronounced and her pain more apparent, I knew I wanted to help the eating disorder community.”

The young men slept in church halls and firehouses, amazed by the kindness of strangers. They chased off vicious dogs with an air horn, cycled through snow, sleet and rain. They were enveloped by clouds of gnats, plagued by flat tires.

Some 73 days later, the pair was as exhilarated at finding they’d raised more than $10,000 for Hopkins’ ED research as they were at reaching the Atlantic.