Anorexia: More than a gut feeling 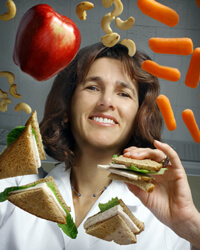 Many patients with anorexia visit a gastroenterologist long before they come to see me,” says psychiatrist Angela Guarda. That’s because the self-starvation and the purging that mark the disorder cause genuine digestive tract discomfort by waylaying its physiology.

Patients will tell gastroenterologists, I have GI pain; I have constipation; I can’t stop vomiting, says Guarda, who heads Hopkins’ eating disorders program. “Their mental set—denial—leads them to formulate all of their troubles as being gastrointestinal. But take the right history,” she says, “and you come to realize that their dieting behavior is causing their GI problems.”

Guarda, Graham Redgrave and colleagues have recently been researching anorexia’s “primary movers.” They use PET imaging, for example, to reveal receptor changes in the brain’s reward pathways that likely drive the disease. “But I’m also interested,” she says, “in the secondary GI complications that keep people sick. They help sustain anorexic behavior by making it uncomfortable to eat more.”

The symptoms typically stem from changes in food’s movement through the GI tract. In starvation, Guarda says, the stomach still empties, but more gradually. Intestinal transit time slows to a torpor, bringing constipation, bloating and a feeling of fullness—just the thing to intensify someone’s fear of eating and of fatness. Also, for reasons not yet clear, starvation can make it painful when food is reintroduced. “It’s not just that people are afraid of eating; their stomachsgenuinely hurt when they first begin to eat reasonable meals,” Guarda explains. All of this works in anorexia’s favor to make treatment more difficult.

Help to break the cycle and heal digestion could come from mapping the underlying biology, which until this last decade has largely been a black box. Guarda’s group has worked steadily with Timothy Moran and the behavioral neuroscience lab he directs to clarify how basic neuroendocrine signaling goes awry in eating disorders.

“Our studies go beyond noting speed or the direction of motion in the gut,” Guarda explains. At least 20 different hormones or peptides cycle in or out as part of a feedback system that links digestive tract and brain—the finely tuned “gut-brain signaling” that underlies sensations of hunger and fullness. Moran has discovered, for example, that a well-known gut hormone, cholecystokinin, trips satiety: It makes an appearance when fat reaches the small intestine, then signals the brain, I’m full.

“We don’t yet understand how all of it fits together,” says Guarda, “but we do know there’s abnormal signaling in patients with anorexia nervosa and bulimia.” Recently, for example, Guarda’s team confirmed that levels of ghrelin, an appetite-prompting peptide hormone, are consistently higher in the bulimia patients they sampled than in those without the disorder.

Fortunately, the GI symptoms seem to clear on their own in treatment, once patients with anorexia return to more normal eating and body weight. “Getting there, however, remains a challenge,” Guarda says. “One hope is that we’ll find targets for new drug therapies to ease the abdominal discomfort that can come with restoring weight.”