Taming a Hyper Hippocampus: A New Way to Go? 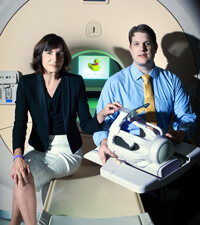 The idea that disorderly memory may tap a brain circuit pathology that Alzheimer’s, schizophrenia or PTSD have in common, and—even better—the suggestion it could be repaired has pulled in top Hopkins investigators like pins to a magnet. Michela Gallagher and Arnold Bakker used fMRI to target the circuit and show parallels between animals and people.

You park your car in the office garage one morning and later remember where it is with only a moment’s flutter. Simple, yes, but without realizing it, you also called up how today’s spot differed from the one the day before and, more generally, what garage you’re now using. “Human memory,” explains Psychiatry neuroscientist Arnold Bakker, “results from a balance between being able to distinguish between highly similar experiences and the ability to generalize.”

Now, new work by Bakker and other Johns Hopkins neuroscientists has pretty well nailed a discrete place in the human brain as home to those memory abilities. Their focus on the CA3 area of the hippocampus came while probing its early vulnerability to Alzheimer’s disease.

But more crucial, perhaps, is this: The research shows that low doses of a common epilepsy drug can—at least temporarily—reverse early memory problems based in these “tender”circuits.

In particular, the study followed 17 people with amnestic mild cognitive impairment (aMCI)—a state of lagging memory that precedes Alzheimer’s disease. Those treated briefly with the anti-epilepsy drug levetiracetam showed a quieting of unusual activity in hippocampal CA3. At the same time, their memory ability improved greatly.

“Our study is small,” says Bakker, “and we definitely want to extend and confirm it.” The researchers’ eagerness is warranted because the study’s clear outcome suggests a new principle to test for Alzheimer’s therapy. But the fact that the work is so well grounded by earlier studies also adds clout.

Michela Gallagher’s contributions, for example, began some years back with rats having trouble with a maze. Needing an animal model of aMCI, Gallagher had her lab follow a large group of healthy aging rats for several years. The break came when a few animals’ memory couldn’t keep pace. Their biology was also oddly off: The rats had abnormally high activity in the hippocampus, a prime Alzheimer’s target.

Marilyn Albert had earlier noted a similar overactivity in human brains, in patients with aMCI. And Susan Bassett showed that not only patients are affected: A too-active hippocampus can extend to apparently healthy relatives of someone who’s died with Alzheimer’s.

So does an overactive hippocampus signal memory at risk, whether in animals or humans? Might damping that activity save it? Bring it back?

Animal work to answer that has been intriguing. Gallagher’s forgetful lab rats were the first to get levetiracetam to quiet nerve firing. They showed less active hippocampuses and improved memory. As for patients, the similar results from giving humans levetiracetam mark a step into the therapy pipeline.

The human study was far more difficult than rat. Sharply imaging the area of a human hippocampal brain circuit—it’s the width of a small pearl—was a feat. But the human work was also more telling.

To measure people’s CA3 activity, Bakker tailored a picture-based pen and pencil test, modifying it so the memory-impaired patients could take it while sausaged in an MRI scanner.

Patients viewed a series of images of everyday objects once. The second time, though, showed slightly different versions of some of the objects. Patients had to mark them as old, new or similar. “Patients unable to differentiate—they gave more old responses—showed increased activity in the hippocampus,” says Bakker. Those on the drug, however, saw little increase, and their performance on the picture test greatly improved.

“We’re far from giving patients anti-epilepsy pills to stave off Alzheimer’s dementia,” Bakker says. “But getting a positive effect from using a chemical to quiet a specific brain circuit…how could we not explore that principle for dementia or other psychiatric illness?”

The Bench. The Bedside