A Weighty Approach to Anorexia Nervosa 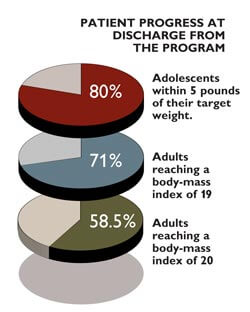 Amid all the debate about how to help patients with anorexia nervosa gain weight, Johns Hopkins psychiatrist Graham Redgrave says he always keeps one thing in mind: Starvation changes the brain. “It impairs judgment and makes patients more obsessional,” explains the assistant director of the Johns Hopkins Eating Disorders Program. As one patient told him, “the more weight I lose, the more I want to lose.” And that spells trouble, as anorexia nervosa is the most lethal of psychiatric diagnoses—with a seven- to nine-fold increased risk of death, compared with healthy, matched controls.

The observation that starvation worsens anorectic thinking—and the reality that weight restoration is necessary for recovery from anorexia—have pushed program director Angela Guarda and Redgrave to ramp up “refeeding” efforts for dangerously underweight patients.

Now, a new study of Johns Hopkins patients hospitalized with anorexia offers good evidence that rapid weight gain during inpatient treatment is safe and effective and can restore weight to the majority of patients over a relatively brief hospital stay.

Guarda, Redgrave and colleagues collected data over eight years from 361 Johns Hopkins patients with anorexia and related disorders. The average length of stay was six weeks in a combined inpatient and partial hospitalization program focused on helping patients gain weight and normalize their eating behavior. Most patients started on a diet of 1,500 calories a day (1,200 if they were extremely malnourished). On hospital day three, the total calories were increased by 500 and then stepped up every other day by another 500—up to 3,500 to 4,000 calories a day.

By discharge from the program, more than 71 percent of adults had reached a body-mass index of 19, and 80 percent of adolescents came within five pounds of their target weight.

“We were able to get patients with anorexia to gain around four pounds a week,” says Redgrave. “That’s twice the national average.” Studies show that patients who gain more weight in treatment, he adds, are less likely to relapse in the first two years after treatment, when they’re most vulnerable.

Careful medical monitoring remains a hallmark of the Johns Hopkins program, especially since an initial drop in serum phosphate when patients begin to consume more calories puts them at risk for refeeding syndrome—potentially fatal shifts in fluids and electrolytes that can cause serious complications, like heart arrhythmia.

Up to now, “slower is safer” has been the clinical view, says Guarda, senior author of the study. “But at what price? If a patient needs to gain 50 pounds but only gains 10 pounds in the hospital, the result is only a temporary improvement.” Furthermore, she adds, recent studies under traditional protocols demonstrate that people can actually lose weight in the hospital during the first few weeks and that low weight at admission, rather than rate of weight gain, is the main predictor of low phosphate levels and refeeding syndrome.

A hallmark of the Johns Hopkins program, says Redgrave, is a highly structured team approach with a focus on behavioral, cognitive and supportive therapies—both one-on-one and in groups. Family therapy also plays an important role. The key, he says, is to strike a balance between confronting patients and providing reassurance and encouragement to help patients change ill patterns of behavior and counter anorectic thinking.

Redgrave is confident that the program’s refeeding strategy will withstand the test of time. He cites 19th century British physician William Gull’s advice that doctors shouldn’t spend too much time asking patients what they want to eat. “Just feed them,” Gull said. “Patients have to eat to get better.”