A Nose for Schizophrenia Risk 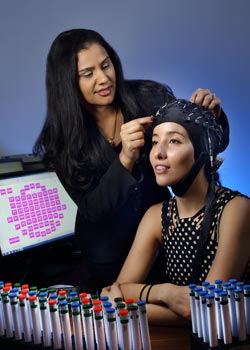 Vidya Kamath adjusts electrodes on a research assistant’s head in preparation for measuring cortical responses in the brain as the subject describes an odor. Sniffin Sticks (foreground) are also used.

Of all the sensory systems, olfaction is most closely linked to the frontal and temporal brain regions implicated in schizophrenia. Measuring potential olfactory dysfunction may therefore provide a window into schizophrenia pathology.

And the earlier in life these symptoms are identified, the better, says Johns Hopkins neuropsychologist Vidya Kamath—ideally, before a patient’s first psychotic episode.

Kamath recently published findings about the relative specificity of olfactory deficits in individuals with schizophrenia, healthy family members and young people at clinical or genetic risk for psychosis but who have not yet been diagnosed with a specific disorder. Clinical risk subjects are those individuals without a first- or second-degree relative with schizophrenia who are experiencing attenuated symptoms of psychosis. Genetic risk subjects have a first-degree relative (parent or sibling) with a diagnosis of schizophrenia and may be experiencing early symptoms.

To Kamath’s knowledge, this is the first study to show that youth at clinical risk are impaired on both odor identification and odor discrimination, similar to observations of adult schizophrenia patients.

These findings are important, says Kamath, because they may represent a genetic marker not only of vulnerability for schizophrenia, but possibly of a neurodevelopmental biomarker associated with the actual development of psychosis.

Kamath’s work draws on insights from her research on the First Episode Psychosis Project, a five-year study focused on the longitudinal changes that occur over the early course of psychosis. Led by Johns Hopkins Schizophrenia Center Director Akira Sawa, the study examines how aberrant brain changes in late-adolescence contribute to the onset and early progression of schizophrenia.

Typically, Kamath and her team see two research participants a week. A thorough olfactory evaluation includes measures of odor identification, detection threshold, discrimination and judging the pleasantness or unpleasantness of an odor.

“When you’re looking for biomarkers,” says Kamath, “you want measures that differentiate between those who will develop schizophrenia and those who are unlikely to develop the illness. Olfactory dysfunction may be an early warning sign of disease vulnerability. Our goal is to come up with a predictive measure.”

That requires rounds of exhaustive tests, Kamath says. Participants are asked to smell an odor and name it. Then she and her team chart the minimum concentration at which they can identify different scents. Finally, participants are asked to rate the pleasantness and intensity of pleasant and unpleasant odors. Other investigators perform a biopsy using a small skin sample from the nasal area to correlate cellular and molecular changes with behavioral olfactory measures.

Many of these at-risk youths, notes Kamath, are also grappling with negative symptoms, such as apathy and social withdrawal. But the ability to predict schizophrenia onset earlier in its course—through nasal clues—can open the door to further interventions, sooner rather than later. These include social and community support and low doses of medication to lessen the severity of symptoms.

The next step, says Kamath, is to look at electrophysiological responses to odors to examine whether at-risk youth display neurophysiological impairments in early olfactory sensory processing.

Meanwhile, with each suspicious finding in patients at risk for schizophrenia, says Kamath, “the most important question we can ask is, how do we help those who have the illness improve their quality of life?”