Senior and Bipolar: Handle With Care 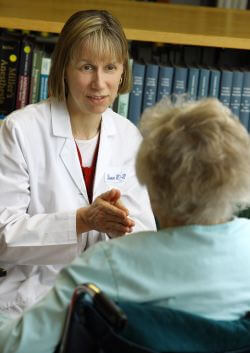 “Cognitive problems in older patients with bipolar disorder can be more intense,” says Susan Lehmann. “They target just what they need for independent living.”

“One of the first patients I ever cared for was a devout Catholic, a 74-year-old woman in a manic episode,” says psychiatrist Susan Lehmann. “She was convinced that the pope wanted to marry her.” When Lehmann explained that the spiritual leader couldn’t marry, the woman replied, “And how do you think I feel about that?”

“As an intern, I was surprised by such depth of conviction,” says Lehmann, who was riveted by how far thinking could go astray in an articulate, mature person. It took only a few more sessions with like patients—plus finding that her mentors’ extraordinary care made a real difference in that age group—to draw her into geriatrics, now her specialty some 20 years. As a clinician and founder of Hopkins’ psychiatric day hospital for geriatric patients—one of few left in this country—Lehmann has been a willing student of late-life bipolar disorder.

“Bipolar disorder is far less common than depression in people over 65, so it’s hard to believe that it’s hugely overrepresented in inpatient psychiatric units,” she says. Up to 19 percent of “geripsych” admissions are for the disease; it also trumps other mental illnesses for outpatient services. Why? Probably because geriatric BP can be truly hard to treat, she says, and relapses are more common.

The trickiness isn’t the disease itself so much as other things. “For example,” Lehmann says, “poorer executive function can appear in bipolar patients at any age. But the effect is often more pronounced in late life.”

And as executive abilities often pale in older patients recovering from a hospital stay, the resulting difficulty of paying bills and planning daily life can end independent living. So, she adds, “we need to recognize that possibility and find ways to ride it out.”

Problems can arise, too, with medications. Fortunately, recent concerns about patients taking lithium—the gold standard—for decades appear unfounded, Lehmann says. But with age, lithium’s side effects of tremor or unsteady gait become more bothersome. “And for our patients who develop hypertension or diabetes in later years, managing lithium, with its known small window of safety from kidney toxicity gets more precarious.” HCTZ, for example, commonly taken for high blood pressure, can join with lithium in a hazardous mix. Even ibuprofen at arthritis-relieving levels is suspect.

Still, there’s a bright side. Sure, greater expertise is called for in these patients, Lehmann says, but if it’s available, they respond very well. That’s one reason she founded the day hospital in 1992. It’s an intensive program that gives elders the close monitoring and psychiatric oversight they need—especially after insurance shaves their inpatient stays.

There, Lehmann and colleagues have built in a high sensitivity to their charges’ problems. “I find that stigma is a big issue for older patients,” she explains. “They’ll say, I’m embarrassed to tell people at church where I was. But that stigma keeps them withdrawn—exactly what they don’t need.”  So role-playing becomes part of therapy, “and it gives patients tremendous relief.

“On the whole,” says Lehmann, “we’re able to keep people until they really are well.”

Psychiatry in the Real World