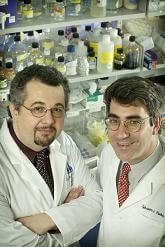 Patients with severe sickle cell disease (SCD) face shortened life spans, intractable pain and eventual organ damage as a result of their disease. SCD primarily affects African Americans. Most patients die before age 50, and many suffer poor quality of life with frequent episodes of “off-the-charts” pain, and an increased risk for kidney failure, stroke, deep-vein thrombosis, and lung disease.  The ability to safely use half-matching donors (parents, most siblings, and all children of the patient) makes bone marrow transplant an effective option for the majority of sickle cell patients.  Kimmel Cancer investigators Ephraim Fuchs, M.D., and Leo Luznik, M.D., pioneered the haploidentical version of the therapy to help patients who do not have matching donors.

“We’re trying to reformat the blood system and give patients new blood cells to replace the diseased ones, much like you would replace a computer’s circuitry with an entirely new hard drive,” says Robert Brodsky, M.D., Director of Hematology and The Johns Hopkins Family Professor of Medicine and Oncology. “While bone marrow transplants have long been known to cure sickle cell disease, only a small percentage of patients have fully matched, eligible donors.”

Six of the transplants were not successful.  The patients own diseased blood cells eventually returned. Work to improve the rate of bone marrow engraftment in half-identical transplants for sickle cell is ongoing.

Funding for the research was provided by the National Cancer Institute and National Institutes of Health grants P01CA15396 and K23HL083089 and Sistema Nacional de Investigadores (Mexico).

Scientists from several institutions, led by researchers at the Kimmel Cancer Center, completed a comprehensive map of the genetic mutations linked to a lethal type of lung cancer, known as small cell lung cancer (SCLC).  “Small cell lung cancers are very aggressive.  Most are found late, when the cancer has spread, and typically survival is less than a year after diagnosis,” says Charles Rudin, M.D., Ph.D., professor of oncology and Director of the Kimmel Cancer Center Lung Cancer Therapeutics Program.  “Our genomic studies may help identify genetic pathways responsible for the disease and give us new ideas on developing drugs to treat it.”

Among the genetic alterations identified by the investigators was an increase in the number of copies (amplification) of a gene called SOX2. Normal cells should contain just two copies of the gene (one copy from each parent), which is involved in embryo development.  In cancer, researchers suspect that amplification causes an overproduction of SOX2 proteins that, in turn, reignites and sustains cell growth associated with tumor formation. “SOX2 is an important clue in finding new ways to treat small cell lung cancer,” says Rudin. “We may be able to link a patient’s outcome to this gene and develop a drug to target it or other genes it regulates.”

The research was funded by the Burroughs Wellcome Fund, the Flight Attendant Medical Research Institute, the National Cancer Institute grants P50CA058184, P50CA70907, and P50CA058187, the CAPES Foundation, and the Ministry of Education of Brazil.

The same scientist who last year transformed human blood cells into beating heart cells has now developed a safe and super efficient method to turn the clock back on blood cells, reverting them to the primitive state from which they derived.  This form, known as the stem cell state, is the point at which blood cells may develop into any other type of cell in the body.

The work by Elias Zambidis, M.D., Ph.D., assistant professor of oncology and pediatrics at the Institute for Cell Engineering and the Kimmel Cancer Center is the latest work in his ongoing effort to efficiently and consistently convert adult blood cells into stem cells that can be used for clinical research use in place of human embryonic stem cells. “Taking a cell from an adult and converting it all the way back to the way it was when that person was a 6-day-old embryo creates a completely new biology toward our understanding of how cells age and what happens when things go wrong, as in cancer development,” Zambidis says.

More common methods use viruses to convert cells to a stem cell state, and among hundreds of blood cells, they typically obtain a successful conversion in one to two cells.  Zambidis chose not to use viruses because they can mutate genes and initiate cancers—the very disease he is working to fight—in newly transformed cells.  Instead, he and his team opted to use plasmids, rings of DNA that replicate briefly inside cells and then degrade, and umbilical cord blood treated with growth factors to transform cells to the primitive stem cell state. This technique resulted in a successful conversion of 50 to 60 percent of cells.

A Johns Hopkins-led study of 216 adults at high risk for hereditary pancreas cancer found that more than four in 10 people have small lesions in their pancreas long before they have any symptoms of the deadly disease. The prevalence of the lesions increases with age, and are most common in people age 50 and older. Ultrasound done by endoscopy was better than MRI and significantly better than CT scans at finding these potential precursors to pancreas cancer.  Endoscopic ultrasound detected lesions in 42.6 percent of study participants, versus 33 percent with MRI and 11 percent with CT.  In five patients, precancerous lesions, likely would have gone undetected, were identified and treated.

About 10 to 15 percent of all pancreatic cancers are hereditary.  This research, led by Marcia Irene Canto, M.D., M.H.S., professor of gastroenterology and oncology, could help reduce the death rate from hereditary pancreas cancer, which is generally fatal once these lesions begin to grow and symptoms appear. “We now know that although these high-risk patients often tend to develop pancreatic lesions, we can detect the lesions, track them over time and remove them before they become cancer,” says Canto.

Not all pancreatic cysts or lesions become pancreatic cancer.  Earlier research by Bert Vogelstein, M.D., and his team in the Ludwig Center for Cancer Genetics, are developing biomarkers that predict the malignant potential of cysts. Researchers hope those findings used in conjunction with the results from this new study will help experts find and treat potentially lethal pancreatic cancers while they are still curable.

Experimenting with cells in culture, researchers obtained promising results with two drugs once considered too toxic for human cancer treatment.  The drugs, azacitidine (AZA) and decitabine (DAC), are epigenetic-targeted drugs and work to correct cancer-causing biochemical alterations to the environment of DNA.

The researchers said the drugs also were found to take aim at a small but dangerous subpopulation of self-renewing cells, sometimes referred to as cancer stem cells, which evade most cancer drugs and cause recurrence and spread. The study produced evidence that low doses of the drugs could cause antitumor responses in breast, lung, and colon cancers.

Baylin and his colleague Cynthia Zahnow, Ph.D., assistant professor of oncology and the Evelyn Grolman Glick Scholar, decided to take another look at the drugs after they had showed benefit at low doses in patients with a pre-leukemic disorder called myelodysplastic syndrome (MDS).  Their new work revealed that the low-dose therapy reversed cancer cell gene pathways, including those controlling cell cycle, cell repair, cell maturation, cell differentiation, immune cell interaction, and cell death. Effects varied among individual tumor cells, but the scientists generally saw that cancer cells reverted to a more normal state and eventually died.

The results of clinical trials in lung cancer, led by Charles Rudin, M.D., Ph.D., professor of oncology and Director of the Lung Cancer Therapeutics Program, and published in 2011 in Cancer Discovery, also indicate that the drugs make tumors more responsive to standard anticancer drug treatment.  This means, they say, that the drugs could become part of a combined treatment approach rather than a stand-alone therapy and as part of personalized approaches in patients whose cancers fit specific epigenetic and genetic profiles.

Laboratory findings from Kimmel Cancer Center brain cancer researchers refute outside studies that suggest blood vessels that form within brain cancers are largely made up of cancer cells.  “We don’t question whether brain cancer cells have the potential to express blood vessel markers and may occasionally find their way into blood vessels, but we do question the extent to which this happens,” says Charles Eberhart, M.D., Ph.D., chief of neuropathology and professor of pathology, ophthalmology, and oncology.  “In general, we find no evidence in our study that these vessels contain substantial amounts of cancer cells.”

Eberhart became aware of claims about the cancerous nature of tumor blood vessels by students who solicited his opinion on journal articles on the topic.  “My first reaction to this research was ‘How could this be true?’” says Eberhart. “Our clinical experience examining tissue from brain cancers does not support it.”

Research has long demonstrated that malignant brain tumors contain large numbers of blood vessels to feed their growing demand for nutrients. The blood vessels are formed when tumors pump out growth factors that increase vessel production. Such studies opened the door to treatment strategies that specifically targeted blood-vessel growth and the vessel cells themselves. More recently, scientists in Italy and at the Memorial Sloan Kettering Cancer Center in New York published results of studies suggesting that these tumor blood vessels are made by primitive types of brain cancer cells and were more prone to drug resistance.

Eberhart teamed up with colleagues at the Dana Farber Cancer Institute and Harvard Medical School to examine the molecular features of brain cancer cells from 100 patients and used biomarkers as well as known brain-cancer related gene mutations to distinguish normal vascular cells from cancer cells.  They found that only 10 percent of the samples contained vascular cells that had cancer gene mutations, and in those rare tumor samples, only a few cells were affected.

These findings, that refute the prevalence of cancer-like blood vessels, call into question the use and value of anticancer drugs that target blood vessels in brain cancer patients.

Sequencing our Genes:  Is Cancer Written in our DNA?

Technology called next generation sequencing can be used to reveal an individual’s complete and entire DNA (whole genome).  Right now, it costs about $5000 to sequence an individual’s whole genome, but the price tag is decreasing rapidly. With its increasing affordability, many have suggested that it could be used to identify individuals who were likely to develop cancer in the future as well as those who would be safe from the disease.  But, will it?  [Link to blog]

Provoking an Immune Response to Cancer

Breakthrough discoveries have revealed an immune inhibitory checkpoint called PD-1 that is co-opted by tumors to shut down an immune response to cancer cells.  Two clinical trials that used antibodies to block PD-1 and a related resulted in significant and long lasting responses against melanoma skin cancer, renal cell (kidney) cancer, and lung cancer.  Read the story on page #.

New Findings on BRCA1 Breast Cancer Gene
Kimmel Cancer Center breast cancer researchers have showed that the inactivation of a single copy of the breast cancer gene BRCA1 leaves breast cells vulnerable to cancer by reducing their ability to repair DNA damage, causing genetic instability, the hallmark of cancer.  An inherited mutation in BRCA1 is the leading risk factor for hereditary breast cancer, prompting preventive mastectomies or close monitoring.  Learn how these new findings may aid development of drugs to prevent hereditary breast cancer and tools to identify women who benefit most from prophylactic treatments.

Predicting Which Lung Cancer Drugs Will Work
Researchers showed that DNA changes in a gene that drives the growth of one type of lung cancer could make cancers cells resistant to treatment. The findings indicate which classes of drugs won’t work and which ones may be the most effective. Learn more.