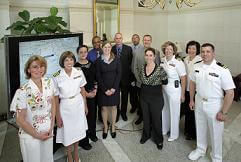 1 2
The Johns Hopkins Hospital hosted a joint reception with the U.S. Navy to commemorate its partnership to train Navy social workers

Social work is an integral part of medicine. Johns Hopkins was one of the first hospitals in the nation to recognize the clinical contributions of social workers and to establish a department of social work as part of the practice of medicine. What began in 1898 as an innovative approach to training medical students –sending them into the community to understand how environmental living conditions affected their patients’ health – evolved into the Johns Hopkins social work program, formally established in 1907.  It soon became a model for hospitals throughout the United States. Although beginning with just a handful of practitioners, the current workforce at Johns Hopkins has more than 100 social workers who see thousands of patients a year.

In April 2009, Johns Hopkins Hospital was invited to become a part of the Navy Health Services Collegiate Program. By September 2009, the hospital had its first fellow on campus. Today, the hospital hosts seven fellows who are assigned to four departments of social work, including two who are working in the Kimmel Cancer Center.

Dr. Edward Miller, Dean and CEO of Johns Hopkins Medicine, opened the reception by reminding his civilian and military colleagues of the institution’s commitment to supporting the U.S. military. “We are honored to be a partner to our U.S. Navy,” said Miller. “There is no greater honor than to help those who serve our country and to teach one another. It is that student who will go on to do great works, to touch countless lives and to heal countless hearts.”

Once a civilian community within the Navy, the Navy Social Worker community is now accepting uniformed social workers to be better positioned to support the needs of Navy and Marine Corps families. “We need to continue to grow our mental health professionals to support our service members,” said Capt. Michele Weinstein, the Assistant Chief of Staff at the Bureau of Medicine and Surgery and deputy director Medical Service Corps.

“We want to see this program grow and we expect great things from our fellows here at Hopkins.”


Hot Off the Press
Journalist and Hopkins Physician Team Up to Write Prostate Cancer Book
On the subject of prostate cancer, there are self-help books and Web sites, friends and doctors, but some of the best insights may come directly from men who have beaten the disease.

Prostate cancer expert Arthur Burnett and former CBS News producer and writer Norman Morris have compiled a series of interviews with prostate cancer survivors, including Arnold Palmer, Ken Griffey Sr., and Pat Robertson, to discuss topics ranging from screening and surgery to spousal support and erectile dysfunction.  He deftly weaves in scientific and medical facts that help readers understand the choices made, and in some cases avoided, by each survivor.

As a 30-year veteran writer and producer at CBS News radio and television, Morris believed that using his training as a storyteller could help other men facing the disease.

“When I know something, I want to share it,” he says.  Morris then sought out collaboration with his own physician, Burnett.  The partnership resulted in the four-part book released in April 2010.  Read more at www.prostatecancersurvivorspeak.com/.

The National Institutes of Health National Center on Minority Health and Health Disparities and four partner institutions, including Johns Hopkins, announced a $3.8 million grant for research on minority recruitment and retention in cancer clinical trials.

According to the Centers for Disease Control and Prevention, racial and ethnic minorities suffer more from cancer than the U.S. population as a whole, developing certain types of cancer more often with a greater chance of premature death due to late-stage detection. Although much is known about cancer incidence rates in minority populations, little research exists to understand behavior and social environment—the barriers and biases that limit participation and access to clinical trials.


Engineering in Oncology
Engineering professor Denis Wirtz, Ph.D., co-director of the Institute for NanoBioTechnology and director of the newly-formed Engineering in Oncology Center (EOC), was awarded the distinction of American Association for the Advancement of Science (AAAS) Fellow. Wirtz, was elected for his contributions to cell micromechanics and cell adhesion. He also was distinguished for his development and application for particle tracking methods to probe the micromechanical properties of living cells in normal conditions and disease state. The EOC was launched in October 2009 with a $14.8 million grant from the National Institutes of Health to bring together experts in cancer biology, molecular and cellular biophysics, applied mathematics, materials science, and physics to study and model cellular mobility and the assorted biophysical forces involved in the spread of cancer.

“Dan has launched a career that will ultimately result in curing this disease, and this professorship gives him the flexibility and resources to propel us into the future,” says William Nelson, M.D., Ph.D., Kimmel Cancer Center Director.

The MacMillan professorship was established by Nancy and Duncan MacMillan in memory of Ian T. MacMillian,  an-award winning fiction author and celebrated professor at the University of Hawaii, where he taught creative writing from 1966-2008. He died of pancreas cancer in 2008.

“I am honored to be the inaugural Ian T. MacMillian Professor, but I am profoundly aware that this honor comes at a great personal expense to the MacMillan family,” says Laheru.  “I personally take the responsibility to form collaborations and translate research into treatment advances for pancreas cancer.”

Cover Story: Personalized Medicine is Here, The Time is Now