Promise and Progress - Cover Story Sidebar: The Serendipitous Discovery of a Cancer Starter

Cover Story Sidebar: The Serendipitous Discovery of a Cancer Starter 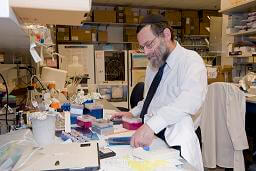 Barry Nelkin in his laboratory.

For a team of Kimmel Cancer Center scientists, the path to a discovery was found unexpectedly.

Postdoctoral students Chris Strock and Eric Nakakura were working in the laboratory of cancer biology expert Barry Nelkin, when they happened upon a journal article describing how neurological cells form the developing brain. They read that cells break away from other neurological cells, migrate away and invade other cells.  They were struck by how similar the process was to cancer metastasis—the way in which cancer cells break away from the original tumor and spread to other parts of the body.

The biological mechanism that allows neural cells to migrate and invade neighboring tissue was controlled, they read, by an enzyme called CDK5.  The enzyme had not been studied much by cancer scientists, so they decided to take a closer look in the laboratory and found that blocking the CDK5 stopped cancer spread in prostate cancer cell lines by more than 75 percent.

Meanwhile, Nelkin attended a presentation at the Kimmel Cancer Center’s weekly translational research conference by pancreatic cancer scientist, Anirban Maitra.  “I thought that pancreatic cancer, one of the most aggressive and quickly spreading of all cancers, would also be a great place to look for this enzyme,” said Nelkin.  Maitra agreed.

One of their first experiments was to find out if CDK5 had any effect on cancer cells’ ability to migrate, form cancers and metastasize.  When they deactivated CDK5 in cancer cells in the laboratory, the cells grew well, but didn’t migrate or efficiently form cancers and metastasize.  How then, they Nelkin and Maitra wondered, does CDK5 work to promote pancreatic growth and spread?

The answer was in a cellular pathway connected to the CDK5 enzyme that plays a key role in cancer growth.  The pathway, known as RAL, controls how cells move.  Without CDK5, activity of the RAL pathway stayed low, but when reactivated with the enzyme, the cells formed into tumors again.

“The RAL pathway is significant because it’s one of three major pathways controlled by a well-known cancer gene called RAS, which is abnormal in more than 90 percent of pancreatic cancers and an important target for therapy,” says Maitra.  “Scientists have already found drugs that can target proteins in the two other pathways, but they’ve been trying for more than a decade to develop drugs that target RAL proteins.  Most efforts have been unsuccessful due to the proteins’ impervious shape.”

Nelkin suggests that efforts could now shift to drugs that target CDK5 rather than RAL.  “CDK5 has the ability to shut down the RAL pathway and is a protein more suitable for drug development.”   In ongoing laboratory studies, the scientists found that blocking CDK5 in conjunction with the two other pathways stops the growth of cancer cells.

They plan to work with pharmaceutical companies to test their approach in animal models.

Cover Story: Personalized Medicine is Here, The Time is Now