Promise and Progress - Ken Kinzler on the Ludwig Center

Ken Kinzler on the Ludwig Center 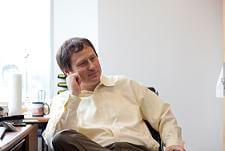 Many scientists make a discovery, but few make them by the dozens as the Ludwig Center team co-directed by Kenneth Kinzler, Ph.D., has done.  Ludwig Center researchers became the first to define essentially all of the genetic mutations that occur in cancer, and they are consistently on the forefront of cancer medicine and discovery.  In this conversation, Dr. Kinzler gives us a glimpse into the laboratory and discusses the challenges the Ludwig Center team has taken on.

With far fewer scientists, your laboratory became the first to decipher the cancer genome and time and time again, your discoveries have outpaced much larger laboratories. What is the key to this success?

Part of the reason we have been so successful and beaten huge groups is because of our Ludwig funding.  It allows us to do what’s important.  Our focus is not decided by committee.  We could do the most groundbreaking research without having to worry about where the next level of funding would come from. We had the freedom to think outside of the box and do things outside of the box.  We try to develop research projects that are not in the mainstream now, but we could put them there a decade from now.  As important is our team of scientists. We are fortunate to have some of the most talented scientists from around the world, and they all share the vision of pushing research to the limit to help cancer patients.

What is different about the Ludwig Center team?

For one thing, our scientists have widely different backgrounds.  I have a background in toxicology and pharmacology.  Bert Vogelstein trained in mathematics and pediatrics and is the undisputed leader in the basic science of human cancer.  Nick Papadopoulos is an expert in genetics and diagnostics and their translation to the clinic.  Shibin Zhou trained as a physician and  in neuroscience and is now an expert in biological therapies. Luis Diaz is a board-certified oncologist who sees lots of patients every week and brings a familiarity with clinical issues and with cancer patients on a personal level that helps us make sure we’re steered in the right direction.   Our team is not just faculty members, of course.  It’s young people, the best and brightest in the world, from a variety of disciplines, including chemistry, physics, yeast genetics, fruitfly research, veterinary medicine, computer science, neurosurgery, protein structure, engineering, and even classic Greek.   These different experiences and perspectives allow us to take on this incredibly complex problem with the ability to see it from many different vantage points.  Individually, I think it’s fair to say we are all very good scientists, but collectively, collaboratively, we are that much more.  As a team, we have been able to do extraordinary things.

What makes cancer so complicated?

Think about trying to tell identical twins apart.  There are probably a few things that make them different, but they are very subtle.  And that’s the difficulty with cancer.  The enemy is our own cells.  The changes that distinguish a cancer cell from a normal cell are not easily recognized. At one time in history, it was infections, like the plague, that threatened the most lives, but these things are as foreign to our body as they can be, and so the immune system recognizes them.  Our immune system doesn’t recognize cancer cells as well as infectious agents because the cancer cells are so similar to normal cells.

With 50 trillion cells in the human body, it is a complex machine that functions in a coordinated fashion.  Each cell contains DNA that is 6 billion chemicals strung together. These cells know when to replicate, when to die, when to reproduce.  They must work in a coordinated fashion.  They do it because they have a genetic instruction book to guide them.  Cancer results when this instruction book becomes corrupted.

In 2004, the entire genetic code of normal cells was read for the first time.  That can be compared to reading 3,000 volumes of War and Peace.  This was important, because now that we knew what the normal human genome looked like, we could begin to sort out the differences in the cancer cell.  That’s what our lab did and revealed where the genetic instructions broke down—specifically, what genetic alterations were driving cancer.

What does this mean for the management of cancer?

Take the IDH1 gene, for example.  No one was interested in it.  Then we made a discovery in gliomas linking it to 70 percent of these brain cancers.  No one else was interested in IDH1 until our laboratory proved it was important.  Now, there are drugs to target it.

These discoveries also point to functions in cells that are defective in cancer and are the very basis of individualized medicine and risk assessment.  Already, clinicians are using this information to select drugs for therapy, and more and more drugs are being identified to target these defects.

In our lab, we are most excited about the potential to use them to detect cancer earlier.  As the defects we’ve described occur only in cancer cells, we can use them to develop tests that find cancers before they produce symptoms and to monitor how they respond to treatment.

The Ludwig Center at Johns Hopkins

Training Scientists Who Lead Cancer Discovery Around the Globe

Sequencing Our Genes: Is Cancer Written in Our DNA?

Ken Kinzler on the Ludwig Center