In This Section
Home > News and Publications > JHM Publications > Promise and Progress > Engineering Cures: Physicians and Engineers Working Together to Fight Cancer

Engineering Cures: Physicians and Engineers Working Together to Fight Cancer
Issue No. 2012

Gifts and Donations to the Johns Hopkins Kimmel Cancer Center 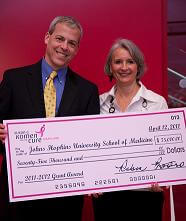 Commonwealth Foundation Gift Creates New Center for Personalized Cancer Medicine
A $30 million gift to Johns Hopkins from the Commonwealth Foundation for Cancer Research will push the pace of developing targeted therapies based on an individual cancer patient’s genetic “fingerprint” by establishing a Center for Personalized Cancer Medicine.

The gift will be used to support innovative research and new technologies that pinpoint the unique cellular characteristics of each patient’s cancer.  Targeting these alterations will improve treatment outcomes, thwart cancers before they develop and slash the costs of new drug discovery.

Johns Hopkins scientists have led the field in deciphering the genetic landscape of cancer and uncovering key genetic mutations and pathways. This work has had immediate application to patient care. For instance, a test called PARE, or personalized analysis of rearranged ends, not only detects cancer but also can tell if a therapy is working by measuring, in real time, the amount of cancer DNA in the bloodstream.  The personalized test can tell if a person is cured with surgery or if there are cancer cells left behind and will require additional treatment.

“This is a watershed moment,” says Kimmel Cancer Center Director William G. Nelson. “With this gift from the Commonwealth Foundation, we’re poised to change cancer medicine.”

Funds for the new Center will initially support three pilot projects over four years focused on genetic research from changes to the genes themselves to changes to the DNA inside genes, known as epigenetics, are aimed at better diagnosis, treatment and even prevention. Investigators will examine which genomic and epigenomic determinants impact responses to treatment in patients; study individualized early detection of human cancers by developing clinical tests that use genetic and epigenetic changes as markers for early diagnosis; and individualized immunotherapies using the specific genetic makeup of each patient’s tumor.

The Center will include cancer experts from many disciplines at Johns Hopkins such as oncology, engineering, public health and surgery.  Nelson indicated that a hallmark of Johns Hopkins is collaboration across specialties.  A recent gift to Johns Hopkins University to support an individualized health initiative at Malone Hall will enhance efforts in the Center for Personalized Cancer Medicine.

“The convergence of brilliant scientific minds with this significant gift has brought us to a point where we can alter the course of cancer in ways we could only imaging just a decade ago,” says Nelson.

One Night, One Show, One Cause
The Baltimore Sound Stage was the site of the annual benefit concert hosted by PRS Guitars and featured an amazing evening of entertainment, including alternative rock band Vertical Horizon, Davy Knowles of Back Door Slam, Dave Weiner of the Steve Vai Band, blues guitarist Donna Grantis, the Paul Reed Smith Band, and our own Kimmel Cancer Center director William Nelson.  Dr. Nelson traded his lab coat for a guitar and appeared on stage as a guest artist. Six PRS guitars, autographed by the Baltimore Ravens and other celebrities, were given as door prizes to a few lucky attendees.   Several more guitars, embellished with original designs by local artists, were auctioned at the event.

One Cause is the flagship benefit concert of PRS Guitars.  Since 2000, PRS Guitars has raised more than $2 million for the Kimmel Cancer Center’s Living with Cancer Resource Program, which provides free supportive care programming and education to patients and families.

Bobbie Burnett’s Angels “Making a Difference”
Bobbie Burnett and the Caring Collection were recently featured in an NBC Nightly News segment called “Making a Difference”.  Bobbie and her dedicated group of volunteers, who have been making and selling stained glass angels since 1982, were recognized for their work in bringing hope and comfort to cancer patients and families around the world, and for donating proceeds of nearly $1 million to the Kimmel Cancer Center and other Maryland institutions.  Learn more about the Caring Collection.


The Friends of Skip Viragh Helping Fight Pancreas Cancer
Carl Verboncoeur considers some of the best times of his life the years he worked side by side with Skip Viragh at Rydex Investments.  He still clearly recalls the Rydex founder A. P. “Skip” Viragh, Jr.’s hard fought battle with pancreas cancer, a disease that ultimately claimed Viragh’s life.  Verboncoeur, who once served as Rydex CEO, says he wanted to do something to honor his boss and friend and to give back to Johns Hopkins whose researchers and clinicians work so hard to fight the disease.  He and his wife Lynn started the Friends of Skip Viragh Memorial Fund and are supporting the studies of leading cancer pancreas experts Elizabeth Jaffee and Daniel Laheru.  “Johns Hopkins is on the forefront of pancreas cancer research and care,” says Laheru, “and generosity like this gives us the means to explore novel therapies that may improve the lives of patients fighting this disease.”

In recognition of Mr. Kimmel's accomplishments and contributions to the company, including his many years of outstanding leadership, the Board of Directors announced that the company will donate $8 million to support his many charitable initiatives, including a $6 million donation to the Kimmel Cancer Center.


Just Suppose- A Campaign to Cure Childhood Cancer
Cancer strikes more than 12,000 children and teens each year.  While pediatric cancers are rare, they claim the lives of more children than any other disease.  But, there is good news.  At Johns Hopkins, we understand the urgency that pediatric cancers demand. The Pediatric Oncology Program of the Johns Hopkins Kimmel Cancer Center is focused entirely on the research and treatment of childhood cancers. As one of the leading Cancer Centers in the United States, we are at the forefront of developing new treatments and designing clinical trials. With world-class expertise, a culture of cross-disciplinary collaboration and a proven track record of successfully bringing therapies from the laboratory to patients, our researchers are leading the field in developing treatments and cures for childhood cancer.

"We're the ones leading the way—finding the genes, studying what they do in terms of the biology of a particular pediatric cancer, and developing molecularly targeted therapy against it," says Donald Small, M.D, Ph.D, Kyle Haydock Professor and Director of Pediatric Oncology.

For the first time in the history of cancer medicine, the technology exists to quickly decipher the cellular causes of every cancer.  Kimmel Cancer Center researchers have pioneered the science that has led us here and were the first to crack the genetic code of a pediatric cancer. Through collaborations with Johns Hopkins engineers, we are developing the technologies and methods needed to manage the immense amounts of data this research generates and apply it to cancer medicine. What we learn, will allow us to target the very biological mechanisms that cause a cancer to grow and spread.  With these discoveries, we can begin to alter the course of pediatric cancers in ways we could only image a decade ago.  There is much to be hopeful about.

Our goal is to create a $30 million research fund to ensure that these promising initiatives have the steady support they need to result in monumental leaps in knowledge, and ultimately cures for all children with cancer.

Just suppose you could help a child with cancer.  You can.  Learn more

Swim Across America Baltimore
More than $525,000 Raised to Benefit Kimmel Cancer Center
The Baltimore swim held September 18 had more than 600 swimmers and raised more than $525,000 to support the Swim Across America (SAA) Laboratory at the Kimmel Cancer Center. The event was held at the Meadowbrook Aquatic and Fitness Center in Baltimore and included Olympians Tara Kirk, Wendy Weil Weinberg, Brenda Borgh Bartlett, Craig Beardsley, Janel Jorgensen, and Theresa Andrews. Despite the open water swim relocating to the pool, because of storm runoff and health safety of our swimmers, the event was a huge success.  Money raised will support cutting edge cancer research in the SAA Laboratory, directed by Luis Diaz, M.D., including a study examining the use of circulating tumor DNA to detect and monitor more than a dozen types of cancer.
Take a virtual tour of the Swim Across American Laboratory


Pancreas Cancer Researcher Named Everett and Marjorie Kovler Professor
Scott E. Kern, M.D., was named as the inaugural Everett and Marjorie Kovler Professor of Pancreas Cancer Research. Kern, professor of oncology, is co-director of the Kimmel Cancer Center Gastrointestinal Cancer Program.  With more than 20,000 journal citations, his pioneering studies of pancreas cancer are widely recognized.  His research is the basis of a number of U.S. patents and novel and ongoing therapeutic trials for pancreas cancer at the Kimmel Cancer Center and other cancer centers.

The Kovler Professorship was established by the Blum-Kovler Foundation.  It is believed to be the first professorship endowed specifically for pancreas cancer research.

“Pancreas cancer does not receive the attention, financially or scientifically, that it should,” said Peter Kovler, Foundation Chairman, whose mother Marjorie Kovler, died of pancreas cancer in 1970 at just 49.  The Professorship is named for and memorializes her and his father Everett Kovler.  His family chose Johns Hopkins, he said, because of Scott Kern and the dedication and excellence of his scientific team.  “If Hopkins perceives pancreas cancer as important, then others might follow, and pancreas cancer research might become a scientific priority,” says Kovler.

“Scott is a research-oriented pathologist, bringing together molecular biology and pathology to fight pancreas cancer,” says William G. Nelson, M.D., Ph.D., Director of the Kimmel Cancer Center.  “We hope this generous support from the Kovler family will mark the beginning of the end of pancreas cancer.”


GIANT Food
Each year, Giant associates and customers join together to fight pediatric cancer through its Triple Winner Program. The program has raised more than $4.75 million for pediatric cancer research at the Kimmel Cancer Center.

Triple Winner is a scratch card game, and every $1 dollar donation helps fight kid’s cancer and provides participants the chance to win a free product, gift card, or cash prize up to $10,000.

Hyundai Hope on Wheels Donates
Baltimore Area Hyundai Dealers and Hyundai Hope on Wheels selected David Loeb, M.D., Ph.D., to receive the Hope Grant, a $100,000 award to support his sarcoma research.  Heather Symons, M.D., was named a Hyundai Scholar and received a $60,000 award to support her research of novel immunotherapies for patients with high-risk hematologic and solid tumor malignancies.

Hyundai Hope on Wheels is the united effort of Hyundai Motor America and its more than 800 dealers across the U.S. to raise awareness about childhood cancer and to celebrate the lives of children battling the disease.

The award was given by the St. Baldrick’s Foundation, a volunteer-driven charity committed to funding the most promising research to find cures for childhood cancers and give survivors long and healthy lives. Go to www.HopkinsMedicine.org/KidsCancer to learn more about Johns Hopkins Pediatric Oncology.

Kimmel Cancer Center Director William Nelson with D. C. United players, Santino Quaranta, Clyde Simms, Perry Kitchen, Brandon Barklage, Joseph Ngwenya took the field to run drills with the children assembled from public schools all over Baltimore City.  In addition to the professional players from D.C. United, collegiate players from Loyola University and  the University of Notre Dame of Maryland also assisted at the clinic.
“We’re proud that Red Card Cancer is teaming up with DC United during its Community Soccer Clinic right here in our home town of Baltimore to raise awareness about cancer so that together we can kick cancer out of the lives of everyone,” said Nelson.