In This Section
Home > News and Publications > JHM Publications > Promise and Progress > Engineering Cures: Physicians and Engineers Working Together to Fight Cancer

Promise and Progress - In the News

Engineering Cures: Physicians and Engineers Working Together to Fight Cancer
Issue No. 2012 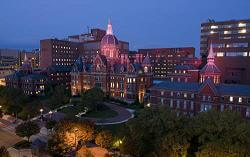 1 2 3 4
In honor of Breast Cancer Awareness Month the iconic Johns Hopkins Dome was lit up in pink, a tradition which Hopkins began in 2009.

Pancreatic Cancer
A Patient and His Doctor Balance Hope and Truth

In this book, pancreas cancer patient Michael J. Lippe and his Kimmel Cancer Center oncologist Dr. Dung T. Le alternate chapters. Lippe writes about the early signs that something was wrong; Le continues with a description of pancreatic cancer, its symptoms, and its treatments. Lippe further discusses his prognosis, the prospect of death, and how he began to cope; while Le explains the importance, for both doctor and patient, of balancing hope and truth. Lippe talks frankly about the toll the disease takes on his marriage and family and Le offers a general picture of what most patients can expect with their illness. The book concludes with Lippe and Le's reflections on their partnership in treating cancer, lessons learned and thoughts about the positive things that sometimes emerge from illness.

Pancreatic Cancer offers clear explanations of the disease, what people with the disease will feel physically and mentally, and the current treatments and future directions of research. The authors hope that their honest yet hopeful perspective will help all people with cancer and those who care about them.

Pretty in Pink
In honor of Breast Cancer Awareness Month the iconic Johns Hopkins Dome was lit up in pink, a tradition which Hopkins began in 2009.

The National Cancer Institute (NCI) selected Johns Hopkins as one of eight institutions to develop a catalog of proteins created by cancer cells.  The information, which will be made available to other researchers, could be used to develop new ways to detect cancer and treat the disease.

The network, called the Clinical Proteomic Tumor Analysis Consortium, will leverage information already revealed about cancer genes through the Human Genome Project and The Cancer Genome Atlas network to predict proteins produced by tumors.  Principal investigator, Daniel Chan, Ph.D., professor of pathology, oncology, radiology, and urology and director of Hopkins’ Biomarker Discovery Center, says that protein signatures can be used to spot cancer or its recurrence in patients and as potential targets for new therapies.  The information can be combined with genetic information from patients to create a complete picture of cancer.

Chan says the Johns Hopkins team will focus on ovarian cancer and expects to receive $2 million annually for five years from the NCI.