Physician Update - When the stomach also rises: Treating a form of hiatal hernia that compromises the esophagus

When the stomach also rises: Treating a form of hiatal hernia that compromises the esophagus 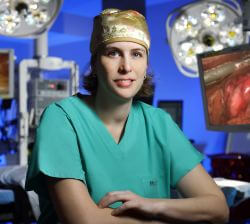 Surgeon Anne Lidor specializes in a minimally invasive procedure that can spare patients from the agony of paraesophageal hernia.

It can provoke the sort of intense chest pain that some patients mistake for a heart attack. It will defy antacids. If left undiagnosed and untreated for too long, it can eventually grow into a series of complications including gangrene and a choking off of the blood supply, resulting in death.

But a paraesophageal hernia needn’t get this far, says Johns Hopkins surgeon Anne Lidor, whose caseload is increasingly centered on repairing a condition with a little-known prevalence that is nevertheless growing with the American population’s advancing age.

Lidor, who specializes in minimally invasive operations for gastrointestinal conditions ranging from acid reflux to stomach cancer, says it’s easy to appreciate why paraesophageal hernias often defy easy detection. When part of the stomach migrates through the diaphragm and into the upper chest, patients’ presenting symptoms can be vague and suggest a host of other causes.

When patients arrive in Lidor’s care, they’re typically in such a state of discomfort that a surgical solution sounds like a godsend.

The procedure once rested in the domain of open surgery, which often required weeks in the hospital and lengthy recovery. With the four-hour laparoscopic repair that enters through the upper belly and is closed out with a bioprosthetic mesh material, says Lidor, patients usually go home the next day.

In recent years, says Lidor, fellow subspecialists have debated how best to close the incisions within the gastric and esophageal tissues. The chief dilemma centered on whether surgeons should use sutures or a form of mesh. Lidor conducted a meta-analysis showing that mesh repairs reduced surgical failure rates by 60 percent.

A separate dilemma, says Lidor, lay in which type of mesh to use—those based on synthetic materials or on bioprosthetic materials. Lidor prefers the bioprosthetic mesh materials, which she says produce fewer adhesions because they do not stimulate a foreign body reaction. Bio material also helps with rapid vascularization, making it less susceptible to infections.

Of course, adds Lidor, “there’s no free lunch,” even with the laparoscopic procedure, so patients must spend several weeks working up to their normal diets. But eight weeks out, she reports, most patients are back to their old tricks. “I have a lot of really happy patients,” she says.