The assist after cardiac surgery 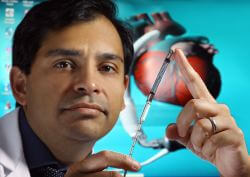 Although not all patients are candidates, Ashish Shah sees new possibilities.

To sustain a high-risk heart patient during the first days after surgery, Ashish Shah has found a tactic to believe in. In recent months, the cardiothoracic surgeon has employed the latest thinking in how to assist a recovering cardiac muscle without flooding the rest of a weakened body with taxing medications.

“We’re getting away from chemically supporting these patients’ hearts,” says Shah, whose work in cardiac surgery is complemented by his primary specialty as the surgical director of Johns Hopkins’ lung transplantation program, “and moving toward mechanically supporting their hearts. It’s better for the rest of the body.”

The new approach draws on recent advances in cardiac assist devices that make them an appealing alternative to medications aimed at easing the postsurgical transition. The medications may be good at improving a weakened heart’s pumping ability, says Shah, but they exact a toll on untargeted organs, such as the kidneys, liver and brain.

And he says, many late-stage cardiac patients already have compromised kidney function. “In the past, we really didn’t have good ways to maintain these people medically,” says Shah, “so they either died or were refused surgery.”

Johns Hopkins has long been successful using left ventricular assist devices, which are connected to patients’ hearts in an open procedure that has allowed patients to live long enough for heart transplants. The LVADas also sometimes extend lives when transplant is not an option.

But Shah says newer technology offers its own prospects because it’s moved away from the pulsatile method of pumping blood to a more continuous flow approach. Small—only 5 to 6 millimeters at its widest—and driven by an external power pack about the size of a netbook computer, it can be threaded via catheter up through the femoral artery in a matter of minutes. It uses magnetically levitated propellers to drive blood flow, makes virtually no noise and generates almost no heat.

Shah, cardiac transplant surgical director John Conte and heart failure director Stuart Russell give two examples of patients they’ve helped with the new option. One man, who has severe kidney disease, needed bypass surgery and a mitral valve repair. By using the short-term mechanical support to maintain blood flow to his kidneys, they were able to avoid giving him high-dose medications, and he made a complete recovery without further kidney injury.

Another patient was in profound shock and required emergent bypass and mitral valve surgery. But after the operation, even when he was receiving maximal medications, his cardiac function would not sustain him postoperatively. Shah placed a new-generation Impella pump, and the patient recovered over the following week.

Both patients are alive and well.

Though Shah describes the new device implant procedures as easy, he believes the ideal candidates must be chosen in a way that’s “up front and thoughtful.” The intention, he says, is to use the technology only for short durations, from perhaps three days up to a full week. Patients need anticoagulation therapy while the device sustains them, which puts them at increased risk for bleeding and stroke. So far, says Shah, the devices appear to produce very negligible clot material.