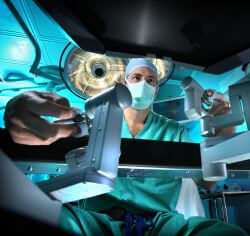 Christian Pavlovich: “We’re always looking for ways to take it to the next level for patients.”

Like most urologists, Christian Pavlovich was intrigued by the arrival of robotic-assisted surgical technology a decade ago. He was already immersed in enhancing the full range of standard laparoscopic tools for radical prostatectomy, and as new innovations began flooding the field, one unwavering goal became clear throughout his department. Any minimally invasive procedure to remove a cancerous prostate done at Johns Hopkins’ Brady Urological Institute would have to meet the standard that Patrick Walsh had pioneered when he began proving 30 years ago that it was possible to resect the gland without doing permanent injury to the nerves responsible for urinary continence and erection.

Today, virtually all of the radical prostatectomy techniques at Hopkins are performed as nerve-sparing procedures, says Pavlovich, director of urologic oncology at Johns Hopkins Bayview Medical Center. This includes the open retropubic approach (via a 5-inch vertical incision on the lower belly) and the minimally invasive and robot-assisted approaches (done through four to six keyhole incisions in the lower abdomen).

Pavlovich says most patients—especially those whose prostate cancers are caught in the early stages—are eligible for minimally invasive approaches, associated with less bleeding, pain, and internal scarring (bladder neck contractures).

One of Pavlovich’s refinements included a minimally invasive prostatectomy technique that allowed him to enter the pelvis directly through laparoscopic keyhole incisions, bypassing the abdominal cavity completely. With this extraperitoneal approach, Pavlovich found, he could still gain precise access to the prostate gland, seminal vesicles and vasa deferentia while avoiding any damage or manipulation of the abdominal organs. By developing a minimally invasive access route under the rectus muscles and in front of the bladder, Pavlovich was operating in the same space as open surgeons, but with minimally invasive tools. He found that his technique was particularly well suited to men with prior lower abdominal surgery, inflammatory bowel conditions, central obesity, or other reasons to avoid abdominal surgery yet still have a minimally invasive procedure.

While Pavlovich continued to refine traditional laparoscopic radical prostatectomy, he and his colleagues also began embracing advances in robotic technology. Now, he says, with the most current iteration of the surgical robot—which has smaller arms that fit more elegantly within the extraperitoneal space—they can combine the best of both worlds. His patients have already started reaping the benefits of robot-assisted laparoscopic extraperitoneal radical prostatectomy.

Furthermore, some laparoscopic techniques have also improved the open procedure here. “From watching robotic prostatectomies,” says Walsh, “I saw that the prostate can be lifted anteriorly, and then you can dissect the prostate away from the nerves, rather than dissecting the nerves away from the prostate, which has been the standard way of doing it in open surgery.”

By using a Babcock clamp at the bladder neck, he says, surgeons can see further around the posterior side of the prostate and with this better access release the nerves even more gently. “I’ve already had what appear to be some immediate responses,” he says. “I am very enthusiastic about this.”

“We’re always looking,” says Pavlovich, “for ways to take it to the next level for patients.” With previous reviews of their data, they found that 90 percent of men were continent after one year, and 75 percent confirmed successful intercourse. Though they haven’t fully analyzed their most recent outcomes data, Pavlovich has seen some dramatic early responses in terms of return to urinary control, and even potency, after robotic extraperitoneal prostatectomy.