A full-court press on liver cancer 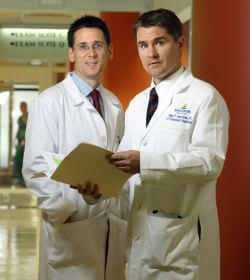 Timothy Pawlik and James Hamilton regularly see patients who’ve been told there is no treatment.

When cancer originates in the liver, as with hepatocellular carcinoma, it’s often a genius at evading detection until it’s well past the stage of being easily treated. And, because these primary cancers are most likely to occur in livers already compromised by cirrhosis or hepatitis, physicians face the need to manage a patient with two devastating diseases in the same vital organ.

Just as challenging is cancer that metastasizes to the liver. If discovered when there are a limited number of tumors in the liver, surgeons can often resect them. But when the tumors are large or spread throughout the liver, surgery may be out of the question.

Hepatologist James Hamilton fully understands why so many physicians advise such patients to get their affairs in order. “These patients,” he says, “are among the sickest around.” Yet Hamilton and his colleagues at Johns Hopkins’ Liver Tumor Center are determined to alter the prognosis, even for patients with advanced disease.

In fact, says Hamilton, his group provides second and third opinions for patients who’ve been told that nothing can be done. Backing their ability to accept such patients, he explains, is a bench that’s wide and deep. “We have five hepatologists, three to four interventional radiologists and chemotherapy experts, 10 liver surgeons,” he says. “At our weekly meeting to review individual patient cases, it’s common to have 20 to 25 people—all liver specialists—contributing to our decision.”

Hamilton, who co-directs the weekly liver tumor clinic, brings the global perspective of whether a particular patient will tolerate a given therapy. That role, he says, is crucial because of the array of treatments that Hopkins provides.

“We are one of the few centers in the country,” says Timothy Pawlik, director of hepatobiliary surgery, “helping patients who have cancer that’s metastasized to the liver and need 70 to 80 percent of their liver removed.”

Using images provided by liver radiologist Ihab Kamel, they determine how much of the liver must be resected. If only one side is affected, interventional radiologist Jeff Geschwind may use portal vein embolization to block its blood supply, causing the nontumorous side to grow. When that side represents 20 percent to 30 percent of the total liver, the surgeons remove the tumors. For patients with tumors throughout both sides of the liver, they can remove all the cancer from one side of the liver, wait for the other side to regrow, then remove the remaining cancer.

To help patients with primary liver cancers who aren’t candidates for transplantation and whose cancers are too advanced to be resected, the liver team offers tumor ablation, which can be done using minimally invasive approaches.

When these options aren’t possible, the team may use transarterial chemoembolization (see A Direct Hit to the Tumor).

“We also have clinical trials,” says

Hamilton. “For example, we’re one of only a handful of centers worldwide offering a trial combining chemotherapy and interventional radiology. Even though about half the patients we see have advanced disease, we can almost always improve their quality of life, and in many cases we can extend its duration as well.”