Physician Update - A direct hit to the liver tumor

A direct hit to the liver tumor 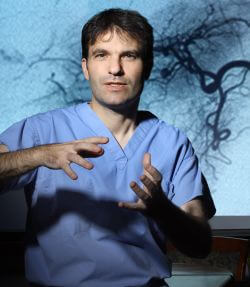 Even when liver cancers are inoperable, says Hopkins’ interventional radiology director Jeff Geschwind, he and his group can often still intervene. Among their specialties is transcatheter arterial chemoembolization (TACE), a technique that delivers chemotherapy to the primary tumor via a catheter threaded to the blood vessel that’s feeding it.

“Essentially,” says Geschwind, “you are using the artery as a roadway to kill the tumor.” The blood vessel is then embolized to block the tumor’s vascular supply and keep the anticancer drugs in the tumor.

TACE has been shown to extend the lives of liver cancer patients to a median of 26 months; without therapy, patients with inoperable liver tumors typically die within six months.

The TACE technique has been further refined with drug-eluting beads (DEBs) loaded with drugs that can be delivered more efficiently to the tumor tissue. Once the tumor is fully surrounded by the microbeads, their payload can be released for up to three weeks.

When DEB-TACE works as intended, says Geschwind, the tumor slowly shrinks and dies. It can sometimes be safely removed.

Although many factors play into a patient’s eligibility for DEB-TACE, Geschwind sees it as part of an improving arsenal against liver cancer. Besides extending life in patients whose cancer has spread, the technique, he says, could one day also better allow physicians to remove liver cancers pre-spread or be used as part of an add-on therapy after surgery.