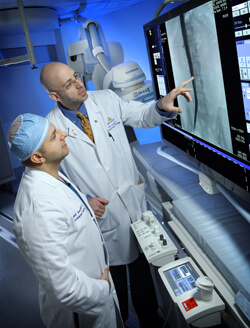 1 2
Anobel Tamrazi, left, and Mark Lessne are using laser sheath tissue ablation to remove IVC filters, like the one pictured here, that have become trapped in the blood vessel.

Until now, a patient with an inferior vena cava (IVC) filter that’s become trapped in the vessel might have had no option for its removal and faced a lifetime of health risks and anticoagulant therapy. Finally, a few physicians, including Johns Hopkins interventional radiologists Mark Lessne and Anobel Tamrazi, are performing laser sheath tissue ablation to remove the adhesions that hold the IVC filter fast. This novel technique was introduced at Stanford University, where Tamrazi trained.

The usual patient receiving IVC filter is at high risk for venous thromboembolism and a poor candidate for anticoagulation therapy. In 2012, in the U.S., about 250,000 IVC filters were implanted—supposedly temporarily.

Ideally, these filters are removed when the risk of thromboembolism has passed. The FDA recommends that efforts to remove IVC filters be made as soon as possible, saying that, “If a patient has a retrievable IVC filter that should be removed based on his or her individual risk/benefit profile, the primary care physician and/or those providing ongoing patient care should refer the patient for IVC removal when feasible and clinically indicated.”

The standard approach for retrieving an IVC filter is to snare it with a dedicated filter grasping device and ease it out through the jugular or femoral vein. “This can be easier said than done,” says Lessne. “Connective tissue can grow into the filter and hold it tight.” Although lodged IVC filters are not always problematic, they can fracture, migrate or penetrate the IVC or bowel, or cause acute IVC thrombosis or chronic IVC occlusion. Some patients want the filter removed so they can stop the anticoagulant medications that they’re required to take.

The laser sheath tissue ablation technique is an option when the standard approach and progressively more aggressive tension fails, but can still be done minimally invasively through small skin nicks. “We know from the literature that 40 to 60 percent of retrievable filters cannot be removed by standard methods,” says Tamrazi. “This is especially true of filters that have been in place for over a year.”

With the patient under light sedation, Lessne and Tamrazi enter the vessel and ablate adhesions by means of photothermal energy from the laser sheath. Using measured tension, they guide the laser sheath progressively along the filter, free it and capture it for removal. The technique may also work on IVC filters of an earlier, permanent design.

“We want physicians in the community to know that the procedure is available. It may eliminate the risk of complications associated with long-term IVC implantation, and it eliminates the burden of filter-related lifelong anticoagulation,” says Lessne. “We like hearing from patients that with the filter removed, their life has returned to normal.”