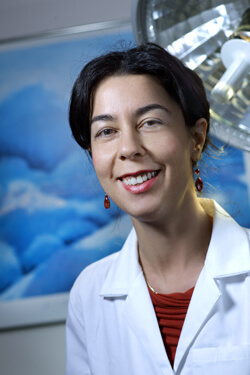 Many women with inflammatory bowel disease (IBD) believe they can’t start a family. In reality, careful planning can allow them a perfectly normal pregnancy and childbirth.

Gastroenterologist Brindusa Truta says patients often worry that their IBD will make it difficult to conceive or that the medication they take could either prevent pregnancy or endanger the fetus.

Truta, who specializes in treating the disease in women, says there are several keys to a healthy pregnancy. The first is getting the condition into remission.

Before conception, the biologic medications adalimumab and infliximab can help manage exactly that. After conception and under the careful watch of the physician, women can usually remain on the regimen during the first and second trimesters.

“We’ve found that, if you’re still in remission by the third trimester, stopping the medication doesn’t cause a flare-up,” Truta says. “There’s a theory that during pregnancy, immunotolerance occurs.”

Because adalimumab and infliximab are tumor necrosis factor inhibitors, they shut off the autoimmune attack of IBD, restoring order to the colon and small intestine. Although a relatively new treatment for the disease, they’ve been used to treat rheumatologic and other conditions for 20 years and are not associated with teratogenicity.

“When the disease is well controlled through medications and proper care,” says Truta, “it’s most likely that pregnancy outcomes are going to be similar to those in the general population.”

Truta’s other key to healthy pregnancy in women with IBD is recognizing that care is a team effort.

She stresses that controlling the disease involves more than just a gastroenterologist. “It can’t be done effectively by only one provider,” she says. “You need a family practitioner and a high-risk gynecologist to be involved.”

Women with IBD may also face issues around body image, Truta says. “It’s private and it’s intimate and it’s not easy to talk about. I like to encourage them to discuss it, because there are things we can offer to help.”

Finally, Truta works with patients to teach them how to manage their IBD. “Spending an hour educating patients means they will know when to call you,” she says. “They know not to discontinue their medication and won’t end up coming to you in crisis.”