Early Diagnosis Is Key to Better Outcomes in Perthes 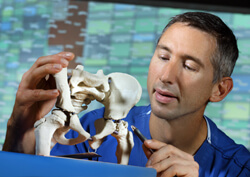 John Tis, a pediatric orthopaedic surgeon, is working to improve the diagnosis and treatment of Legg-Calve-Perthes disease, a hip condition most common in children ages 4 to 9.

Even though it was first described more than a century ago, Legg-Calve-Perthes disease is so rare—it affects just five to 10 per 100,000 children under the age of 15—that little is known about which treatments are best for which patients. A condition that affects the hip, it is most common in children between ages 4 and 9, and it is four times more common in boys than girls, explains John Tis, a pediatric orthopaedic surgeon at Johns Hopkins.

Perthes occurs when blood flow to the femoral head of the hip joint is interrupted, eventually causing the bone to die. As a result, the hip can break—and heal poorly.

But which treatment is best? Should a Perthes diagnosis always mean surgery?

In an effort to close the knowledge gap, Tis has become part of the International Perthes Study Group—a collection of 45 surgeons and researchers from around the world who are currently focused on enrolling children with Perthes in a central database to enable long-term studies on the diagnostics, treatment and outcomes of the disease.

“We have interventions, but we don’t really know how they are working until we get 10 years of follow-up,” says Tis, who has been treating Perthes patients at The Johns Hopkins Hospital and Walter Reed National Military Medical Center for more than a decade.

If diagnosed with Perthes in the first few months, the majority of patients can be treated with anti-inflammatory drugs and physical therapy, Tis has found. But many children older than 8 and a minority of younger children with Perthes will have a large loss of blood flow and require surgery. “If we can act before the body starts absorbing the bone—in the first six to 12 months—and put the hip in a contained position,” says Tis, “then the femoral head will mold into a more normal, round shape that matches the acetabulum [the concave part of the pelvis].”

Typically, Tis says he performs a femoral osteotomy to put the femur in the right position. The patient is in the hospital for just two days and on crutches for six weeks before going back to normal activity.

Catching Perthes early is tricky, and a missed diagnosis can be a major challenge to successful treatment. “Early on, the first symptom a child shows is a painless limp,” says Tis. “But it is not always recognized. By the time patients come to see me, some already have hip collapse.” Once the hip breaks, only salvage surgery is an option, and the patient will likely go on to need a hip replacement at a young age.

When young patients do present with a painless limp, Tis performs a physical exam and X-ray to identify any subtle loss of hip abduction or abnormal shape. If he sees any abnormalities suggestive of Perthes, he will recommend a special protocol perfusion MRI to determine just how much of the femoral head is affected. The perfusion MRI can help determine which patients will benefit from surgery before the femoral head collapses and it is too late for surgery.

While there is still much to learn about Perthes, Tis says, what is known is that catching the condition early leads to better long-term outcomes. “It can be the difference between the femoral head collapsing and the patient getting early arthritis versus getting treatment to have a healthy hip,” says Tis. “When physicians see a painless limp and immediately send those patients to us, it can make a big difference.”