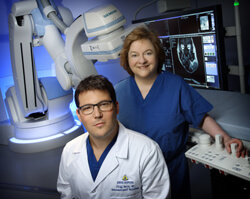 1 2
Per week, Sally Mitchell and Clifford Weiss see 10 to 15 patients with vascular malformations, such as the one shown in the next slide.

The trouble with vascular malformations is that they’re masters of disguise. Indeed, says Sally Mitchell, director of vascular anomalies at The Johns Hopkins Hospital and associate director of the Interventional Radiology Center, these congenital vascular anomalies of arteries, veins, and/or lymph vessels “are extremely rare, can occur almost anywhere in the body, and are easy to mistake for tumors or cysts.” As a result, patients may be referred to oncologists, orthopedic surgeons, dermatologists, vascular surgeons, ENT surgeons or other specialists.

The good news, says Mitchell, is that when these benign aberrations—which can emerge at any age—are correctly diagnosed, they are very responsive to nonsurgical treatment. Because the disease is so easily misdiagnosed, estimates of incidence can range from 1 in 100 to 1 in 5,000. Mitchell and interventional radiologist Clifford Weiss see about 10 to 15 patients a week with these disorders from all over the world.

A large percentage of patients with vein or lymphatic malformations, says Mitchell, can be treated with ultrasound- and X-ray-guided injections that are delivered directly into the growth. Some require only one percutaneous dose of alcohol, sotradecol, doxycycline, bleomycin or other powerful sclerosing agents. This burns the inside of the lesion and causes it to shrink away. The treatments that Mitchell uses are based on algorithms that she developed for the various types of lesions that can occur.

But it’s not always a one-shot deal, because the condition can recur with hormonal cycles, pregnancy or adolescence. “It’s not just a matter of looking at an MR image,” says Mitchell. “You also need to see the patient, figure out what it is and what the treatment is now and for the long term.”

Although some cases are straightforward, such as those that are small or on an extremity, others are more complex. “We’ve seen massive malformations in the face, neck, hands or deep in the belly,” says Weiss. These can pose dangers when critical organs are involved and may trigger severe pain and bleeding.

Because the lesions can develop anywhere in the body, Weiss and Mitchell work in tandem with other specialists, including dermatologists, orthopedic surgeons, hematologists, ENT surgeons, MRI specialists, geneticists and plastic surgeons. This multidisciplinary group meets in a monthly conference in which they present complex cases to help educate clinicians about the malformations’ many guises and to sort out appropriate treatments for patients.

An Elusive Diagnosis, Then Reprieve

Three years ago, Leonard Piotrowski developed neck pain that became progressively worse. He went to see his primary care doctor, who, knowing that Piotrowski had a history of arthritis in his cervical spine, referred him to an orthopedic surgeon. The surgeon sent Piotrowski to a pain specialist, who performed radiofrequency catheter ablation to kill nerve receptors. Piotrowski felt relief for a brief period, but says the pain then returned “with a vengeance.” Another ablation followed, but again the relief was short-lived.

By then, Piotrowski, could barely function. Every turn of his head became excruciating. He sought help from a neurologist, who diagnosed him with a tumor on the branch nerve at the base of his neck. Two other neurologists confirmed the diagnosis, and Piotrowski was referred to Johns Hopkins for specialized imaging.

Alan Belzberg, the neurosurgeon reading the image, suspected that the lesion wasn’t a tumor but a vascular malformation. So he referred Piotrowski, 61, to interventional radiologists Sally Mitchell and Clifford Weiss.

Mitchell and Weiss confirmed that Piotrowski had a venous malformation. Weiss targeted the lesion percutaneously, with an MRI-guided Sotradecol treatment. The procedure took more than three hours because the lesion was tiny and deep in his trapezius muscle. “It was hard to distinguish on standard imaging what was muscle and what was lesion,” says Weiss. “Using our specialized interventional MRI sequences, the lesion was more easily seen and targeted, something which would have not been possible using ultrasound and fluoroscopy.” As soon as he came out of anesthesia, Piotrowski says, “I was pain free.” Before the treatment, he says, he hadn’t been able to sleep more than two hours a night. “Now I get a good night’s sleep, take out the garbage and travel to see my grandchildren. I’m a happy person.”