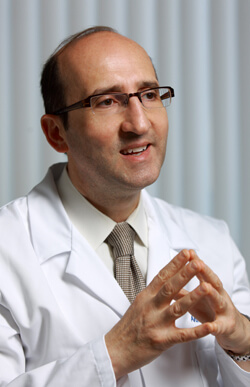 Thousands of children and adults who were once in liver failure are alive today because of live donor liver transplantation (LDLT). Yet in recent years, interest in LDLT as a viable alternative to cadaveric donation has waned. In part, that’s likely because of the emergence, in 2002, of a priority-based national model scoring system for wait-listed liver recipients. Those patients with higher MELD (model for end-stage liver disease) scores based on the urgency of their condition—bilirubin and creatinine levels and prothrombin time—can receive cadaveric livers sooner. Even so, the average wait time for a cadaveric liver donation in the US is 149 days for adults and 86 days for children.

Though LDLT surgery is more complex, he says, “our experienced team does a rigorous workup, and only after the donor has been deemed a good match surgically and psychologically will we consider doing the operation.” Still, ever since a highly publicized donor death in New York in 2002, perceived high mortality risk for living liver donors persists.

Under skilled hands and with standardized protocols, the answer, says Gurakar, is yes. According to a widely cited 2012 study published in Gastroenterology by transplant experts at The Johns Hopkins Hospital, including Live Liver Donor Surgical Director Nabil Dagher, the risk of early death among live donors in the United States is 1.7 per 1,000. Furthermore, mortality of live liver donors does not differ from that of healthy, matched controls during a mean of 7.6 years.

“From the moment a potential donor is identified,” says Dagher, “our program is exceptionally attuned to that person’s safety.” Each case is discussed among a team that includes a hepatologist, surgeon, transplant coordinators, living donor advocate, social worker, psychologist and nutritionist. The process takes between three to four weeks. The age cutoff for adult donors is 60.

After the surgery, it takes about three months for the donor’s liver to regenerate. Roughly 30 percent of the liver is taken from an adult for a child recipient; about 60 percent is resected in adult-to-adult donation. “The liver is a wonderful organ,” says Dagher. “Once a portion of it has been resected, it immediately starts to regenerate and stays in tune with metabolic needs.”

Johns Hopkins has been performing LDLTs since 1992. Recently the program was reinvigorated with the addition of Gurakar, Dagher and Ayman Koteish, live liver donor medical director. Since January 2012, the team has performed four successful LDLTs—three adult to child, and one adult to adult (in 2012, 246 LDLTs took place nationally). Most recently here, a firefighter donated part of his liver to his infant daughter. He was back to work in two months, says Gurakar, and he and his daughter are doing well.

“LDLT provides the best chance to help our patient population,” he adds. “A live donor can save another life as well by freeing a cadaver liver for a patient who can only go that route.”
----------