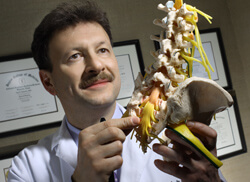 Ziya Gokaslan and his colleagues have unique expertise in removing chordomas, tumors that are often exceptionally difficult to treat.

The chances of being diagnosed with a chordoma are literally one in a million. These rare cancers are thought to arise from remnants of the notochord, cartilage that serves as a scaffold for the backbone during development. When genes for proliferation turn on by mistake later in life, these residual cells can form slow-growing tumors that can be fatal if they aren’t removed.

While these tumors can occur anywhere in the skull or spine, having a chordoma in the sacrum comes with its own special set of challenges, says neurosurgeon Ziya Gokaslan. “There, the tumor can affect nerves for bowel, bladder and sexual function,” he explains. “If the tumor isn’t removed properly, these functions can be permanently harmed.”

Because chordomas usually present as a soft tumor contained in a bag of fluid, it’s critical to remove the tumor in one piece without breaking the bag. If its contents are spilled, Gokaslan says, malignant cells can take up residence in the surrounding tissue and metastasize throughout the body, making a cure impossible.

Gokaslan and his colleagues have amassed significant experience in treating chordomas, including very large tumors that necessitate removal of the entire sacrum. The team has developed techniques that can spare critical nerves if the tumor location is amenable, keeping bowel, bladder and sexual function intact.

When Gokaslan and his team need to remove a patient’s entire sacrum, the lumbar spine becomes dissociated from the hips and pelvis, he explains, requiring total reconstruction with multiple screws, rods and bone grafts.

These operations can take up to 16 hours and may need to be completed over two days.

For such large surgeries, wound closure is a critical element, he adds. Gokaslan and his team regularly work with plastic surgeons skilled in techniques to repair these wounds. These complicated procedures often require pulling an island of vascularized tissue from the abdomen through to the other side, replacing tissue removed during surgery.

To develop better treatments, Gokaslan and his colleagues are conducting basic research to understand why these tumors arise. Recent findings suggest that small RNAs might be able to block the expression of tumor-specific genes in chordoma cells, offering a way to control disease in patients whose tumors couldn’t be removed completely.