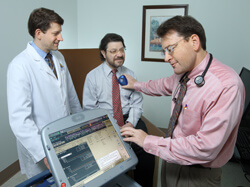 When Mark Olkon, 61, entered The Johns Hopkins Hospital in preparation for a complex ablation last January, he had been coping with hypertrophic cardiomyopathy for more than 25 years. In spite of medical therapy, a pacemaker/defibrillator implantation and an ablation for atrial flutter four years earlier, his condition continued to deteriorate to the point that, in 2011, he was in late-stage cardiomyopathy with atrial fibrillation and congestive heart failure.

“I was retaining a lot of fluid,” says Olkon. “I was short of breath and very weak.”

“Mark is one of the most complex patients out there,” says Schneider. “His heart was badly out of rhythm. We thought that if we could get his heart back into a normal rhythm with the ablation, he would feel much better.”

However, during testing at Johns Hopkins prior to the ablation, Olkon was found to be anemic and edematous, and his kidneys were not functioning properly. He was admitted to the hospital for more tests and treatment to improve his hemoglobin and heart failure symptoms. While his condition improved, his doctors began to reconsider whether the ablation was the right course of action.

“We thought that there was less than a 50 percent chance that the ablation would be successful and since Mark’s heart was so weak, we knew that the procedure would present greater risk. So after thorough discussion, we made a shared decision that the ablation was not the best course of treatment,” says Marine.

Schneider and Marine then considered another option—to upgrade his device to a biventricular pacemaker/defibrillator to pace his left ventricle, as well. Schneider performed that procedure for Olkon at Suburban Hospital, and it proved to be a good decision.

“With cardiac resynchronization therapy, we were able to improve his forward flow and cardiac output,” says Schneider. “His atrial fibrillation is here to stay, but at least now his bottom chamber is pumping stronger and he is feeling better.”

“While I’m still limited in my activities,” Olkon says, “I no longer feel any chest discomfort or shortness of breath, and so it worked out well.”

Olkon says he is pleased with the coordinated care he received. “My care at Johns Hopkins was very good and the doctors there were in constant touch with Dr. Schneider.”
----------