Virtue in a Single Incision 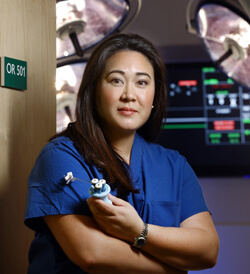 Stacey Scheib holds the SILS port—part-and-parcel of her laparoscopic approach. “My favorite story,” she says, “comes from my patient who lifted the edge of her shirt in an airport, daring the woman passenger she’d just met to find her scar.”

A while back, when Stacey Scheib—then a gynecologic surgery fellow—overheard discussions about single-incision laparoscopic hysterectomy, she was a nonbeliever. “Just the idea made me say that’s crazy,” says Scheib. Already expert in laparoscopy, she’d counter, “I use conventional noninvasive approaches and my patients do so well. What’s the benefit here? With only one port, you lose triangulation.”

Scheib stayed reluctant until her first single-incision laparoscopy—performed on a woman with a grapefruit-size ovarian cyst. “It took no longer than usual,” she says, “and when my patient told me three days later that she’d gone running without trouble, I knew there was something to this!” Since then, she’s performed some 500 of the single-incision procedures and is readying a training program in the technique for Johns Hopkins surgical fellows.

Enthusiasm for the approach wasn’t always high. After its first appearance in 1989, the new laparoscopy failed to take off, Scheib explains, because of a lack of useful technology. It’s only in the last three or so years that companies have sold the specialized ports that give surgeons single access points for multiple laparoscopic tools as well as instruments that bring the triangulation necessary for surgery. The laparoscope that Scheib now uses is itself a model of form and function, with a flexible, articulated tip that clearly opens up the abdominal field. “We get views that go beyond even traditional laparoscopy.”

Patients reap the benefits. There’s the cosmetic bonus of having the single 2-centimeter incision within the umbilicus, leaving no obvious scar. The chief advantage, however, is in whittling the risk of complications that can come with trocar use. “Each new incision in the fascia weakens it, increasing chances of hernia, bowel injury, infection or bleeding,” says Scheib. So a single opening not only reduces that risk, it also lessens patient pain and need for narcotics while preserving greater abdominal wall integrity.

Scheib’s research shows no increase in surgery time or blood loss. Time away from work is shorter: Life typically returns to normal within two weeks. And beyond hysterectomy, Scheib uses the technique for ovary or ovarian cyst removal, select myomectomies and treatment of endometriosis. Her recent studies support its use during pregnancy or for ovarian masses, when done “by the right hands.”

Single incision laparoscopy isn’t common for myomectomies or other situations that call for a lot of uterine suturing—a challenge from one port. “Fortunately,” she says, “there’s no problem if, in the midst of surgery, I find that the single opening isn’t enough to do things safely: I can add another port and I’m back to the way I started.” Being comfortable with the full spectrum of surgery allows tailored care.