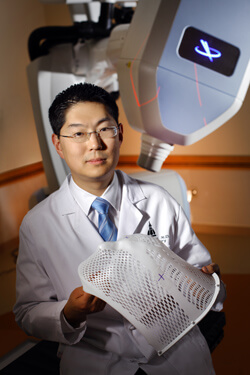 Brain cancers, particularly gliomas, are some of the most difficult to treat. Although surgery and chemotherapy are helpful, they’re typically not as effective as physicians or patients would wish, says neurosurgeon Michael Lim.

“Especially for gliomas, these therapies offer incremental benefits, but no cures,” he explains. “Novel therapies are badly needed.”

First the trials: One involves a vaccine based on heat shock protein (HSP), the body’s rapid DNA-response to stress. HSP is normally found inside cells, but when it’s present outside of them—when cells are dead or damaged—HSP vigorously activates the immune response, and an army of cells mobilize to clean up the debris.

Using this natural response to their advantage, Lim explains, researchers have created a vaccine by joining proteins from patients’ gliomas to HSP. “When turned on by the heat shock protein,” Lim says, “the immune system also ‘sees’ the cancer proteins and learns what it needs to fight.” Because tumor-specific proteins are individually isolated from each patient, the result is a personalized vaccine.

A second vaccine trial is based on the immune system’s dendritic cells.

Earlier dendritic cell vaccines—ones typically formulated by mixing portions of a tumor with the patient’s own dendritic cells—haven’t been successful, Lim says. That’s because tumor bits used for the vaccine may not represent the entire tumor. The result is an incomplete immune response. To get around this, researchers have “taught” dendritic cells to recognize six commonly expressed glioma proteins. “Rather than use the tumor itself,” Lim says, “we expose dendritic cells to the tumor’s most common proteins.”

Vaccine three would ideally help a subset of glioma patients—about 20 percent—whose tumors express a growth factor receptor protein, EGFRvIII. In vaccinating patients with this protein that they’ve linked to an immunostimulant, investigators hope to turn the immune system specifically against this glioma.

Complementing these efforts is Hopkins’ CyberKnife. Like the Gamma Knife, another technology that Hopkins had been using for years, this new machine focuses radiation at patients’ tumors. However, it comes with an additional benefit. While the Gamma Knife requires that patients’ heads be fixed in a stereotactic frame, the CyberKnife allows frameless treatment. Its intrinsic monitor oversees the radiation beams, making adjustments to slight patient movements and keeping tumor treatment continuous.

“We’re ensuring that patients get the best and newest technology,” Lim says, “while also minimizing any discomfort.” The result broadens the range of treatments to extend and improve brain cancer patients’ lives.