Physician Update - For Chronic Mesenteric Ischemia: The Stent's the Thing

For Chronic Mesenteric Ischemia: The Stent's the Thing 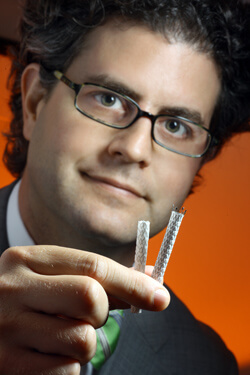 Although coronary atherosclerosis is in the news all the time, little attention gets paid to the fatty deposits that build up in arteries that feed the intestines. So, unfortunately, chronic mesenteric ischemia is often diagnosed at a later, life-threatening stage. By the time patients come for treatment, they are typically undernourished and very weak. This makes them unlikely candidates for an open operation to bypass the blockages.

Johns Hopkins vascular and endovascular surgeon Christopher Abularrage offers a minimally invasive way to treat patients with chronic mesenteric ischemia, however, that uses covered stents. Patients are awake but sedated and can go home the next day.

“In mesenteric ischemia, multivessel blockages in the superior mesenteric artery and the celiac axis are common,” Abularrage says. “So we start by inserting a catheter through the patient’s arm, down the chest into the abdominal aorta. From there, we pass a wire through each blockage and then deploy a covered stent, mounted on a balloon, to open the vessels.”

Abularrage explains that the approach can take place through the brachial artery in the arm or through the groin’s femoral artery. Going through the arm, however, may be the easier route, given the sharp angled take-off of the superior mesenteric and celiac arteries. Both procedures can be performed percutaneously, with minimal pain for the patient.

Abularrage and his colleagues are also studying whether covered stents increase patency of the vessels compared with the older, bare metal variety. He theorizes that the former can stay open longer because they have more radial force and also decrease restenosis because of their effect on intimal hyperplasia.

“Uncovered stents have been used as a bridge to bypass—treating patients’ symptoms so that they are pain-free and able to eat more and build their strength. However, covered stents may replace the need for a bypass,” says Abularrage, who adds that none of the patients he treated more than a year ago with covered stents has had a recurrence.

One of his recent patients, 62-year-old Homer Pullen, of West Virginia, had already gone through triple coronary artery bypass surgery when he developed mesenteric ischemia. “I tried to eat,” Pullen says, “but couldn’t because of the pain, and I went from 180 to 132 pounds.”

Pullen was referred to Abularrage, who performed the percutaneous procedure, starting in Pullen’s arm. Within a month, the patient had gained back more than 20 pounds. “I now eat everything, even spaghetti with meat sauce, and I feel great,” says Pullen, who has been able to go back to hunting, fishing and other activities with his friends that he couldn’t enjoy before.

Most patients with chronic mesenteric ischemia are over age 60—more men than women—Abularrage says, and often have a history of smoking and high cholesterol. Patients present with postprandial abdominal pain and significant weight loss, symptoms sometimes mistaken for gallbladder disease or kidney stones and a main reason for the condition’s belated diagnosis.

Risk factors for chronic mesenteric ischemia are the same as those for coronary artery disease and peripheral arterial disease. Abularrage says the short-term prognosis for Pullen and others following treatment is excellent, provided they make healthy diet and lifestyle changes and stop smoking.