Physician Update - Endoscopy Into the Breach

Endoscopy Into the Breach 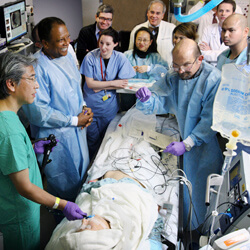 Patient Connie Mills, 55, was five hours’ drive from Johns Hopkins, but worlds away from typical in terms of having her achalasia treated. Recently, Mills became the first patient at Hopkins and one of a handful in the United States, to undergo a NOTES procedure to correct an overzealous lower esophageal sphincter.

The natural orifice transluminal endoscopic surgery, performed by an endoscopic team with surgical backup at the ready, took place in an endoscopy suite—also a first—rather than in the traditional OR setting. Following an oral approach—no external incisions were necessary— practitioners neatly resected the inner circular muscle of Mills’ sphincter, a tactic to relieve her achalasia. Blood loss was less than an eyedropper-full.

The operation was a satisfying close to a bench-to-bedside story that had begun at Hopkins in the late 1990s. NOTES started as a brainstorm that struck gastroenterologist Tony Kalloo as he readied a talk on the future of endoscopy. “I’d been thinking how surgery had become less invasive, from open to laparoscopic,” he says, “while endoscopy had taken its own direction from diagnostic to more adventurous.”

Endoscopists now remove colonic polyps, for example, or drain pancreatic pseudocysts—domains once strictly surgical. Maybe, Kalloo told himself, we could take out the gallbladder. But could he challenge gastroenterologists’ sacred rule: Thou shalt not breach the gastrointestinal wall? Kalloo soon assembled a team that included GI colleagues along with surgical and ob-gyn specialists from around Hopkins—a pioneer group that was game for long hours spent in animal studies.

In 2004, their first published account of NOTES described peritoneal scans and liver biopsies in pigs in which standard oral endoscopic approaches veered into the abdominal cavity via gastric puncture.

Today, over 3,000 of the hardly invasive NOTES have taken place worldwide, including transgastric appendectomies and transvaginal gallbladder removal. For now, most are hybrid procedures that blend laparoscopic surgery and endoscopy.

Despite her sunny disposition, her life was ruled by achalasia. She learned to carry paper cups to catch unbidden food backflow. “Cold liquids would literally shoot from my mouth,” she explains. The ability to eat meat had dwindled to “paper-thin turkey in a lot of gravy.” Some weeks she lived solely on soupy peach cobbler. “My worst fear,” she says, “was to be in a car crash and have to lie flat in an ambulance. Then I’d aspirate the cobbler and die.”

Mouen Khashab began Mills’ NOTES quietly, feeding the endoscope tipped with a tailored needle-knife into the esophagus, then puncturing the mucosa some five inches above the target sphincter. The key, he says, is easing the endoscope into the submucosal space, gently tunneling down the esophagus: “Traveling between layers lessens the risk of perforation and puts you in a good approach to the muscle below.

“And we believe there’s an advantage in taking out only that immediate circular muscle of the sphincter,” he says. “Leaving the remaining longitudinal layer offers enough closure to prevent severe reflux from the stomach.” Studies to compare the NOTES approach and laparoscopic surgery, which removes both layers, will tell for sure.