Ketogenic Diet for the Youngest Patients 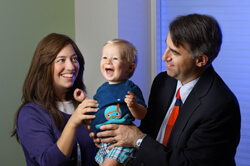 Eric Kossoff and Zahava Turner use the ketogenic diet—a high-fat, moderate-protein and low-carbohydrate diet—to treat babies and toddlers with epilepsy.

Since the ketogenic diet’s inception in the 1920s, it’s gradually become accepted as a mainstream method for treating intractable epilepsy in children. However, say pediatric neurologist Eric Kossoff and dietitian Zahava Turner, many specialists and parents don’t realize that the high-fat, moderate-protein, low-carbohydrate diet can be used in the very youngest patients, toddlers and even infants just a few months old.

Though the ketogenic diet has proven enormously successful in reducing seizures in older children, Turner explains, doctors and parents had long assumed that babies and toddlers weren’t an ideal population for imposing such a restrictive regimen. “There’s been a fear of their ability to tolerate the diet and worries about their growth and development,” she says. A lack of commercial ketogenic foods on the market made administering the diet to very young patients exceedingly difficult, Turner adds.

However, Kossoff says, research in the last several years has shown that the ketogenic diet can be safely given to babies and toddlers and can be effective, successfully cutting or eliminating seizures in many of these patients. With an abundance of new ketogenic prescription formulas now available, parents can administer the diet even to very young infants long before they’re eating solid food. An increasing number of specialized centers scattered around the country, including the Johns Hopkins Ketogenic Diet Center, now use the ketogenic diet as one of the first lines of treatment for pediatric epilepsy rather than a treatment of last resort.

“Between a third and half of patients starting this diet are now under age 2,” Kossoff says. “That’s a big change compared to just 10 years ago.”

Because the diet can have significant side effects—from the easily treatable, such as constipation, to the more serious, including high cholesterol, kidney stones and slow growth—it must be administered under physician supervision. At the Johns Hopkins Ketogenic Diet Center, children of all ages identified as candidates for the diet are admitted to the hospital with their parents for four days to start their new plan under close monitoring. Before admission, the ketogenic diet team—composed of Kossoff and Turner, along with a nurse practitioner, pharmacist, Child Life specialist and members of the nursing team—meet to discuss the details of each patient’s case. They craft individual care plans, taking into account patients’ medical history and lab work, caloric needs and allergies, whether mothers are breast- or formula feeding, and families’ religious and cultural preferences regarding food.

For four days, parents learn the particulars of feeding their children the ketogenic diet while patients start their new eating plans. Members of the care team monitor patients to see whether the diet is reducing seizures while watching carefully for side effects.

Infants and toddlers come back for appointments every few weeks to months for checkups so the care team can keep a close eye on their growth and development. Between appointments, Turner says, parents can call as often as they like to ask questions. “We keep in very close contact with parents of our youngest patients,” she says. “They require a lot of support, and we’re very willing to provide that.”

Though babies and toddlers with epilepsy can be challenging patients, Kossoff says, treating them effectively is extremely rewarding: “We’re very excited by the success we’re seeing with the diet.”