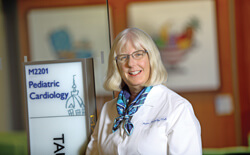 Although it’s the most common inherited cardiovascular disorder, hypertrophic cardiomyopathy (HCM) still presents a conundrum. It doesn’t necessarily reveal itself through a regular physical exam, and even when it is suspected, if there is borderline or normal wall thickness, the diagnosis may be more challenging. In some families, sudden cardiac death is the first indication that HCM is even present. Undiagnosed HCM often is the cause of sudden cardiac death in young athletes.

Furthermore, says Johns Hopkins pediatric cardiologist Anne Murphy, because about 50 percent of children who have a parent diagnosed with HCM also develop the disease, any pediatric patient who faints or develops significant chest pain during exercise, has an abnormal ECG with signs of significant hypertrophy or clearly abnormal T wave changes, or has a family history of HCM should be thoroughly evaluated.

Even after standard diagnostic tests such as echocardiograms and cardiac MRIs, however, the left ventricular hypertrophy that is the hallmark of HCM can be explained by other disorders, says Murphy. Among these are Noonan syndrome, in which children present with facial anomalies, short stature and other issues in addition to left ventricular hypertrophy; Fredreich ataxia, a neuromuscular disorder that causes spastic or absent lower-limb reflexes, scoliosis and bladder dysfunction; or underlying metabolic diseases.

Whether an HCM diagnosis is confirmed or suspected, there are several reasons to consider genetic testing, Murphy says, but never as the first step in evaluating any patient, and always in the context of thorough genetic counseling. Clinical testing can now identify a genetic cause for almost 2/3 of children with HCM. Genetic testing for HCM is best viewed as a family test to determine if other relatives are at risk. The goal is to identify the specific gene and phenotype for each family, which may predict individual disease progression and help inform treatment decisions.

Because multiple genes are tested, says Murphy, there’s always a chance of detecting a variation with unknown significance, but a variation doesn’t always mean disease, nor will it necessarily explain certain symptoms. In such cases, clinical evaluation and family history become even more important. On the other hand, genetic tests may not detect any mutation in some patients with clear signs of heart disease, but that doesn’t mean they don’t have a disorder. “All it means,” Murphy says, “is that we have not found the genetic mutation responsible for their cardiac hypertrophy or symptoms.”

Both the complexity of this kind of information and the ramifications of tests results can be very stressful for patients and family members, which is why Murphy always stresses the importance of genetic counseling before testing as well as after.

“We want to make sure they understand the possible findings,” she says, “and how that may affect their lives and future medical decisions.”