Easing the Journey from Pediatric to Adult Care 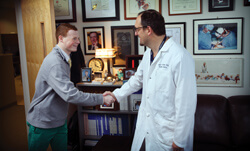 Josh Cobo was well prepared for the transition, says Luca Vricella, thanks to his supportive family and the “strong interconnectedness” between the Johns Hopkins Children’s Center and The Johns Hopkins Hospital.

When Josh Cobo received a new heart in March 2013, he crossed the threshold from pediatric to adult cardiac transplant patient. “Just going from high school to college is difficult enough,” says Johns Hopkins’ director of pediatric cardiac surgery, Luca Vricella, who performed Josh’s operation. But for heart transplant patients, the stakes are especially high if they’re not ready to assume responsibility for their own medical care. “If the patient starts missing cardiology appointments,” Vricella says, “that can translate into higher mortality.”

“It was tough leaving the doctors who had cared for me my whole life,” says Josh, now 20 and a college student. “As soon as I woke up from the transplant, I was an adult patient. But I had met with the adult transplant team and they worked with my previous doctors to help me, so it went pretty well.”

Josh required a heart transplant after years of dilated cardiomyopathy caused by a prenatal viral infection that resulted in multisystem organ failure. All of his organs recovered except his heart, which was dilated with poor ventricular function, says pediatric cardiologist Joel Brenner, one of the physicians who had treated Josh since he was a baby. “In 2009 when we decided he needed a defibrillator, his only concern was that it not interfere with his golf swing,” says Brenner.

However, Josh’s condition slowly worsened, and he was increasingly symptomatic, with shortness of breath, fatigue and swelling. He was listed on both the pediatric and adult heart transplant lists, and after about six months he was matched with a pediatric donor heart. Once on the transplant lists, though, his team began talking with him about the transition to adult cardiac care.

Cardiologist Ryan Tedford, who now cares for Josh, says the key is to communicate with the patient and family members about how care will proceed during the transition. “We always have concerns about this age group and how they will handle the transition,” says Tedford, “but in Josh’s case, we also knew he is very mature and has a very supportive family.”

Although he still thinks of his pediatric doctors, Josh says he loves his new physicians and nurses. “I feel great now,” he says. “I am ready to move on with my life and not be held back by my heart.”