Pediatric Heart News - Getting to Loeys-Dietz in time

Getting to Loeys-Dietz in time 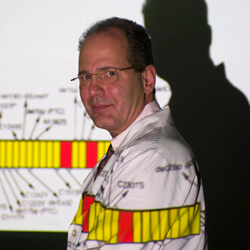 “Five years ago we had no hope of a drug therapy for Loeys-Dietz syndrome,” says pediatric cardiologist/geneticist Hal Dietz, who co-discovered the gene for the disorder. “Now we’re testing nine different medications using our mouse models.”
photo by Keith Weller

Roughly a decade ago, one of the scores of children whose flimsy aortas pediatric cardiac surgeon Duke Cameron had reinforced became the first patient in the world to undergo valve-sparing aortic root replacement for the newly recognized Loeys-Dietz syndrome.

Though Cameron was no stranger to such surgery—he leads the team with the most experience worldwide in repairing aortic aneurysms in patients with Marfan syndrome—he was gratified to find the operation equally successful for the new disease, now considered a genetic second cousin to Marfan. Now a new study confirms the soundness of the prophylactic surgery.

Well before that first operation, when cardiologist Hal Dietz and his Hopkins colleagues first described the condition once thought a form of the better-known Marfan, they saw that Loeys-Dietz syndrome is far more aggressive. Dissection and rupture of the ascending aorta are more likely at a younger age and at a significantly smaller root diameter than in Marfan patients.

Fortunately, reports Cameron, whose Loeys-Dietz operations include children as young as 9 months, patients face a low operative risk: The new analysis of seven years of the surgery shows that the operation can indeed waylay vascular catastrophe.

Yet even those who’ve had root replacement require vigilance. Although Loeys-Dietz’s aneurysms are most common in the ascending aorta, they also threaten the descending thoracic aorta about a third of the time, as well as peripheral arteries, says vascular surgeon James Black, who has analyzed the disease’s arterial course.
Patients require regular monitoring via head-to-pelvis CT angiography so that outlying aneurysms can quickly be repaired.

“There’s a misconception that the distal tissues are fragile,” Black adds. “In fact, they hold sutures very well.”

Given the aggressive nature of Loeys-Dietz aneurysms, Hopkins’ current approach is to perform surgery very early in the course of disease. “We also hope that newly developed mouse models of the syndrome will point the way to effective medical therapies,” says Cameron. “I would like nothing better than to have my surgical intervention for this disease made obsolete.”