NeuroNow - Funding the Lab of the Future

Funding the Lab of the Future 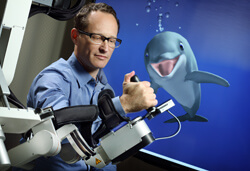 John Krakauer’s lab has created a video game in which players control a neuroscientifically realistic dolphin to improve motor functions in patients recovering from stroke.

For Michael O’Neill, chairman of Citigroup, stroke is a personal cause. After watching his mother suffer from a debilitating stroke, undergoing hours of grueling physical therapy afterward, O’Neill later witnessed a friend and colleague also suffer the aftermath of stroke. It was that colleague who encouraged him to make a difference.

“He told me, ‘You have to meet the doctor who treated me. He’s doing amazing work,’” O’Neill remembers.

His colleagues’ doctor was John Krakauer, director of Johns Hopkins’ Brain, Learning, Animation and Movement (BLAM) Lab. Unlike most other academic medical center labs, the BLAM Lab isn’t a hierarchical setup of a single physician-scientist directing the work of a handful of postdocs and grad students. Rather, Krakauer and his colleagues have assembled an eclectic collection of computer programmers, roboticists, animators, sound engineers, physicists and others to tackle stroke rehab and other health problems involving movement in unusual and innovative ways.

One of the team’s biggest undertakings, known as the KATA project—named after a Japanese suffix that means “skill” or “mastery”—involves taking advantage of this combined expertise to create a video game in which players use flicks of their arms, wrists, and fingers to make an ultrarealistic dolphin spin, roll and dive. Immersed in a pleasurable and convincing underwater world, players don’t just control the dolphin, says Krakauer—they become the dolphin, giving them even more impetus to learn how to command its movements. This motivation could be a boon for stroke patients and others for whom traditional physical therapy can often be an arduous chore, so difficult that many often can’t accomplish their goals of regaining movement. The team recently submitted this game, which they call I Am Dolphin, to iTunes for use on iPhones and iPads.

Such a mash-up of untraditional experts contributing to medical science is the way of the future, says Krakauer. “I would like for this to be a model for how we go forward: neuroscientists working with critically important engineers that together solve these tough problems,” he says. “So much of the time, it’s been a failure of neuroscience to translate basic findings into effective therapy for patients. We have to bring together new experts into the biomedical space, which tends to be conservative and highly siloed.”

But innovation comes at a price, says Krakauer, something that he and his team are sometimes stretched to afford with current federal research funding. That’s where O’Neill was able to help move Krakauer’s vision forward. After visiting Krakauer’s lab, meeting his diverse team and witnessing their pioneering work firsthand, O’Neill decided to give the lab a series of gifts totaling $375,000—funds that will keep this unusual group’s momentum going into the future as they develop more projects to help stroke patients.

These funds aren’t only critically important to support the BLAM Lab’s work, says Krakauer—they also provide an endorsement of this venture from someone who’s been extremely successful in his own profession.

“To have someone with Mr. O’Neill’s prominence and knowledge of running a major league organization support our work is extremely validating,” Krakauer says. “It’s like having a mini mentor, just for a second, to show you that you’re on the right track.”