For Neurofibromatosis Leader, a Fitting Honor 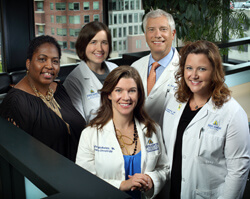 When Hopkins neurologist and neuro-oncologist Jaishri Blakeley  received a letter from the Children’s Tumor Foundation, the premier patient advocacy and research foundation for neurofibromatosis (NF), she thought it might be a solicitation. But when she opened the envelope, she found something far different: congratulations for winning the Children’s Humanitarian Award, the foundation’s highest honor.

“I had to read it twice,” says Blakeley. “People who receive this award are the ones who really move the field forward, and I’m just a regular person.”

Blakeley’s humility aside, she is an expert in neuro-fibromatosis (NF), a group of genetic disorders that disturb cells in such a way that tumors grow directly on nerves, leading to a host of other problems.  Since 2007, she has directed the Johns Hopkins Comprehensive Neurofibromatosis Center (JHCNC), a clinic that now treats over 1,000 patients with Neurofibromatosis Type 1 (NF1), Neurofibromatosis Type 2 (NF2) and schwannomatosis.  It’s her work of leading all aspects of the clinic, from patient care to an ever-growing research program, and it’s international impact that earned her the nomination for the award.

Unlike NF clinics that focus solely on pediatric patients, JHCNC cares for those of all ages. “The periods of late adolescence, adulthood and advanced aging come with their own unique concerns in the setting of NF,” says Blakeley. “We cover all of it.”

She and her colleagues, including neurological oncology nurse practitioner Shannon Langmead, neurosurgeon Allan Belzberg, neurosurgery nurse practitioner Leslie Morgan, clinical coordinator Mary Brown and genetics counselor Jessica Bischetsrieder, build relationships with patients’ primary care physicians and other specialists, who often have little experience treating these conditions. Together, they craft a care plan using evidence-based medicine, some of which the Johns Hopkins team helped develop through robust research programs such as their collaboration with the Department of Defense NF Clinical Trials Consortium coordinated by neurological oncology nurse practitioner Lindsay Blair. Through both the clinical and research programs, the Center has become a leader in better understanding and treating these complex conditions.

Thanks to an extraordinary act of philanthropy—a $27 million gift in 2012—Blakeley and her colleagues run the Neurofibromatosis Therapeutic Acceleration Program (NTAP), founded to fast-track development of new therapies for plexiform neurofibromas, which afflict patients with NF1. Scientists funded by this transformational program have already had numerous successes, including developing several new cell culture models for this condition and testing promising candidate drugs in animal models.

Through this and other Johns Hopkins-based programs under Blakeley’s leadership, the goal is to increase the number of options available to patients with NF.

“The most frustrating thing is that right now we have to give patients a series of bad choices,” Blakeley says. “Would you prefer paralysis due to brain stem compression, or surgery that will make you deaf? It’s a horrible decision to ask anyone to make. In the next five to 10 years, we’ll have better options to offer patients with all forms of NF here and around the world.”