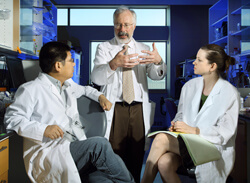 In every healthy developing embryo, the brain does an amazing thing: Starting as a simple tube, cells bud off and move to form layers. This cellular migration is largely responsible for the resulting, complex structure that we use to think, move and regulate many bodily functions. However, sometimes this process goes awry, with disastrous results. About a third of people with uncontrolled epilepsy can trace it to what’s known as migration disorders, in which cells don’t move into the proper position, causing layers to become tangled or misaligned.

In one extraordinary example of this, known as double cortex syndrome, the brain’s outer layer comes in duplicate. How this occurs—and how best to treat the intractable epilepsy that often results—has remained a mystery. However, new high-tech research by Johns Hopkins colleagues Gregory Krauss, a professor of neurology, Kimberly Christian, an instructor at Johns Hopkins’ Institute for Cell Engineering, and Hongjun Song, who directs the Stem Cell Biology Program at the institute, is shedding light on this phenomenon.

To learn more about double-cortex brains, the researchers are taking an unusual tack—actually forming them from patients. The researchers gather skin cells from individuals with double cortex syndrome. Then, using new technology, they turn back the cells’ clock to an earlier stage of development, coaxing them to morph into neurons that make up the brain. As a result, the researchers will be able to study how the function of these neurons differs from the norm as well as from neurons formed in the same way using skin samples from close relatives.

“It’s the first time we’ve been able to look at human neurons with the same genetic background as patients,” Christian says.

The researchers also have been able to encourage the cells to take a step further, forming “minibrain spheres”—structures that, like mature brains, have cavities reminiscent of ventricles and cortical linings. By following the formation of the cortices on these minibrains, the researchers will get an unprecedented look at the first missteps that lead to double cortex syndrome and, they hope, pinpoint the mechanism that leads to this unusual condition. The ultimate goal is to use these models to test candidate drugs for treating epilepsy in patients.

“It’s a great benefit,” Krauss says, “to be able to use this new technology to study migration disorders in human tissue for the first time.”