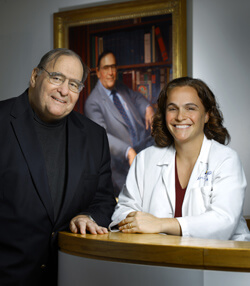 This year, Johns Hopkins celebrated neurology and neuroscience powerhouse Guy McKhann’s 80th birthday with a grand party, complete with dinner and the announcement of a new grant named after McKhann to support a mid-career neuroscientist’s research. “He told all of us to save the date,” says Hopkins neurologist Rebecca Gottesman, whom McKhann has mentored since her days as a resident.

As the time for the party approached, Gottesman began to suspect that she’d be more than just another guest. “When the neurology department director’s secretary asked if I wanted my parents at the dinner,” Gottesman remembers, “that seemed a little strange to me.”

At the party, Gottesman’s suspicions were confirmed—she was indeed the first recipient of the Guy McKhann Fellowship in Clinical Neuroscience, which provides $100,000 every year for five years to encourage Hopkins’ physician scientists to develop ground-breaking research.

According to McKhann, choosing Gottesman for this award was a no-brainer. “She is exactly the kind of person this award is meant for,” he says.

Besides her clinical work treating stroke patients, Gottesman also studies how vascular disease—the broad collection of conditions that affect blood vessels and can eventually lead to heart disease, stroke or other serious consequences—affects the brain. A variety of research has suggested that patients with vascular disease also have cognitive problems, such as poor memory. However, the reasons for this connection aren’t entirely clear, and it’s been unknown whether treating vascular disease might improve cognitive symptoms.

Gottesman has long been interested in exploring this latter question. One particular problem she says she’s wanted to investigate is the connection between congestive heart failure and poor memory. “It’s a vicious cycle,” she says. “The worse their cognitive problems, the more these patients forget their medicine, and the worse their heart failure becomes—and that leads to even worse cognition.”

Gottesman notes that some heart failure patients at Hopkins and elsewhere are treated with aggressive diuresis to pull fluid from their lungs and increase the efficiency of their hearts. Could this treatment also improve their cognition? Years ago, Gottesman submitted a grant proposal addressing this question to the National Institutes of Health (NIH), which funds most medical research in the United States. However, her grant wasn’t funded.

“I had to put this question on the back burner,” she says, “but it’s always remained an interest of mine.”

With the new funding, Gottesman will now be able to seek an answer. The McKhann Fellowship will help pay for staffing to manage the project, efforts to recruit patients, as well costly brain MRIs. Brain imaging in particular, she explains, is key to understanding whether and how diuresis might affect dementia in heart failure patients, but its expense would normally prohibit a project like this one from getting off the ground.

McKhann says many studies like this one, with potentially big knowledge results, are seen by the NIH as too risky to fund. “Getting grants these days is really tough,” he says, “even for really good ideas. This fellowship can be the jump-start that a researcher like Rebecca needs to get a project going.”

For now, he adds, the fellowship will be available for just one faculty member at a time. But eventually, McKhann says, he’d like there to be enough funding for several researchers at once.

Gottesman says that being the first recipient of this gift is about much more than research funding. “The big honor was working with Dr. McKhann for so many years and learning so much from him,” she says. “Getting this award was the icing on the cake.”