An Instant End to Intractable Pain 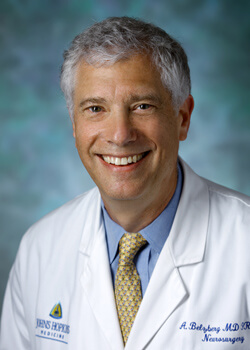 When neurosurgeon Allan Belzberg met Marc Burleson, it was clear that the 31-year-old Marine had suffered through an incredible ordeal. While Burleson was defusing a buried bomb in Afghanistan last December, it exploded, leaving him unconscious for nearly a month. When he woke up, his face was scarred, he was blind in one eye, he was missing half of his right arm and his left arm was paralyzed.

But the most horrific part of his injuries was a searing, unrelenting pain in his paralyzed left arm. Despite heavy doses of narcotics delivered by a team of doctors at Walter Reed Army Medical Center, the pain—which Burleson described to Belzberg alternately as a hot torch being rolled up and down against his arm or his bones being extracted through his fingertips—jolted him a couple of times a minute, every minute of the day and night.

The pain emanated from scars in his spinal cord, resulting from nerves being ripped out from the force of the blast, Belzberg explains. “It’s like an electrical cord being pulled out of a socket,” he says. The scars left in the socket cause a syndrome in the spinal cord much like epilepsy in the brain. But instead of having seizures, Burleson’s injuries caused flashes of incredible pain.

Burleson was trying hard to restart his life, he told Belzberg in that initial consult. Military doctors had reconstructed his face, fitted him with a prosthetic for his right arm, and provided him with aggressive rehabilitation. But the constant pain was a roadblock that Burleson just couldn’t get over. “It stopped him from doing anything and everything,” Belzberg says. “Life wasn’t going to go on for him without help.”

Help was something that Belzberg was able to offer. A few times a year, he performs a rare operation for injuries similar to Burleson’s—traumas such as motorcycle or car accidents, in which limbs are often violently jerked away from the body. To stop the resulting scars in the spinal cord from firing pain messages, Belzberg and his colleagues open the patient’s spine to access the cord. Once there, they use a surgical microscope to accurately pinpoint the scar tissue, then use a radiofrequency probe to burn it away.

Though Burleson wanted to go ahead with this procedure right away, Belzberg says he never allows patients to make a decision on the spot—the surgery isn’t without risks, he explained, including paralyzing healthy areas of the body. At the end of their meeting, he encouraged Burleson to take time and think it over. Within days, Burleson confirmed that he was ready to set a date for the procedure.

In July, Belzberg and his colleagues operated on Burleson, making 140 precise burns  in his spinal cord. When he awoke, Belzberg says, Burleson almost immediately noticed that he no longer had pain. “He was so happy,” Belzberg recalls, “that he said he wanted to marry me.”

Belzberg is only one of a handful of surgeons around the world who perform the procedure, providing a rare service that has the potential to turn patients’ lives around.

“This is one of the most gratifying things that we do at Hopkins,” he says. “By eliminating a patient’s pain, you can change one life 180 degrees.”