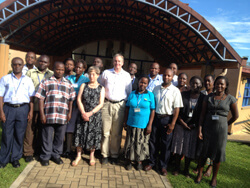 Ned Sacktor is making strides in better understanding the neurocognitive problems that often accompany HIV by studying patients in Uganda, one of the world’s hotspots for this disease.

Besides the devastating hit from HIV on the immune system, the virus also comes with lesser-known consequences, including neurological complications that can cause motor and cognitive problems. It’s an area Johns Hopkins neurologist Ned Sacktor has studied since his residency in the early 1990s. He and other researchers know a significant amount about how these related disorders manifest in countries like the U.S., where antiretroviral therapies have been used for decades. However, Sacktor says, little is known about these complications in sub-Saharan Africa, where nearly 70 percent of the world’s HIV-positive people reside.

That’s why Sacktor, along with American and African colleagues, has organized studies in Uganda for more than a decade.

Sacktor’s research utilizes a long-standing collaboration between the Johns Hopkins Bloomberg School of Public Health and Makerere University in Uganda. Johns Hopkins researchers were already studying HIV in patients at an associated clinic, but neurocognitive assessments weren’t yet part of these studies.

Sacktor’s initial focus aimed to determine how many patients from this clinic were affected by HIV-associated neurocognitive problems. “They see 500 HIV-positive patients every day, five days a week,” he says,  “it’s incredible the number of patients they’re able to provide with high-quality medical care.”

Sacktor’s results showed that 30 to 40 percent of patients seen in the clinic had HIV-associated neurocognitive problems. The prevalence and severity of the HIV-related dementia that Sacktor’s team found were on par with those seen in the U.S. before antiretroviral drugs were widely available.

Sacktor went back to Uganda several times to set up additional studies. Recently, he’s been working on new research to measure the prevalence and severity of neurocognitive problems in patients with various levels of immunological control compared to HIV-negative volunteers. He’s also comparing patients with different strains of the virus to see if this factor changes the prevalence of HIV-related dementias. This research can eventually establish new ways to assess the risk of neurocognitive problems in patients with HIV and help diagnose these issues early, potentially giving doctors a leg up on treating patients early to give them the best chances for success.

“Treatment can be initiated and they can get back to their normal lifestyle,” Sacktor says, “and have a meaningful contribution to their families and communities.”