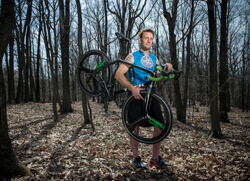 After a major operation to correct a failed spinal surgery, David Beach is now back to cycling regularly.

David Beach is no stranger to adventure, pain or challenges. The 48-year-old director of operations at a manufacturing company in central Pennsylvania has long been a competitive runner and cyclist and an extreme sports aficionado. He’s broken 21 different bones through his exploits, necessitating six different operations to repair injuries to his hands, knees, spine and other body parts. But after a failed spine surgery in 2011, Beach thought his extreme sports days were over—and perhaps, the chance to live a normal life as well.

The operation was intended to repair broken vertebrae from a four-wheeler accident. The procedure—directly under hardware installed after another spine injury when he was 18—instead left him with a pronounced, excruciating bend in his back.

“I was hunched over like a 90-year-old man, with pain running down my legs, numbness and not much hope of riding or running again,” Beach says, “possibly not even working or walking within five years.”

But Beach wasn’t ready to give up. He researched who might be able to fix back problems as severe as his and eventually found Johns Hopkins neurosurgeon Dan Sciubba.

In his first consultation, Beach says Sciubba not only spent an hour talking with him and his wife and reviewed his medical images, but also took photos of Beach to get a better idea of how Beach’s altered posture affected his everyday life.

“We know that the number one thing that negatively affects patients’ satisfaction with spine surgery is if they’re bent forward,” Sciubba says. “It was clear that he hated his current quality of life.”

To fix the problem, Beach would need a massive operation that would remove all the hardware installed during his previous two spine surgeries, rebreak his spine and then put it in an upright position. “This is a major surgery that certainly isn’t for everyone,” Sciubba explains. “It comes with significant risks that not all patients are able to physically or mentally handle.”

Although Beach was hesitant, he was otherwise healthy and says his confidence in Sciubba drove his decision to move forward. On Jan. 22, 2013, Sciubba started the two-day procedure that involved 11 straight hours of surgery followed by another seven hours the next day.

After three days in the intensive care unit, Beach stood up for the first time since before his surgery, 2 inches taller than he’d been in the previous nine years. “When I hugged my wife,” he says, “her head was right under my chin. I remembered what it felt like when we first met. We fit again.”

Today, after intensive physical therapy, Beach is cycling regularly and is easing back into running, activities that he says wouldn’t have been possible without his care at Johns Hopkins. An amateur metal sculptor, Beach showed his appreciation by bringing Sciubba one of his steel creations six months after his surgery.

“He carried this 40-pound sculpture into my office. I couldn’t believe it,” Sciubba says. “I can only take part of the credit for his great recovery. He’s an extremely motivated patient who’s worked very hard to get where he is.”