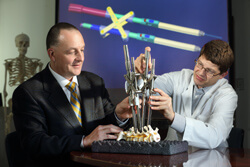 Neurosurgeons regularly provide treatment for spondylolisthesis, a condition in which a vertebra slips forward often because the one under it fractures or collapses. Most surgeries for this condition are open, with large incisions in the skin and muscles pressed aside to access the spine. Then, surgeons need to raise the misplaced bone and move it back over its correctly positioned neighbor, putting rods and screws in both to fuse them together.

But the surgery is far from a simple matter, he adds. This procedure typically leads to months of difficult recovery. Consequently, some neurosurgeons provide a minimally invasive option for spondylolisthesis that potentially could offer less pain and faster healing. However, Wolinsky explains, it’s a difficult surgery to do correctly because the equipment for this technique isn’t designed to move bones with the precision that surgeons can provide with the open procedure — which still isn’t as exacting as he and other neurosurgeons would like.

Several years ago, Wolinsky realized that there had to be a better way. So he looked to his friend Dan Stoianovici, director of the Robotics Laboratory at the Johns Hopkins Brady Urological Institute. This collaboration recently expanded the activities of the lab to neurosurgery devices with partial support from the Johns Hopkins Neurosurgery Pain Research Institute, itself created in 2011 with a $25 million grant from an anonymous donor.

A versatile engineer, Stoianovici and his colleagues at the robotics lab use computer-aided design (CAD) and computer numerically controlled machinery to create tools that could eventually help neurosurgeons at Johns Hopkins and elsewhere perform surgeries more safely with less pain. Though creating new surgical tools is typically the job of industry, Stoianovici explains, being able to collaborate directly with surgeons practicing in the same institution speeds this mission. “Having the lab at Hopkins and being part of the medical school is immediately one step forward,” he says.

When Wolinsky approached Stoianovici about creating a solution for providing spondylolisthesis surgeries more precisely, the two forged a hands-on collaboration that’s ongoing. They spent hours sitting in front of the CAD program, fine-tuning each other’s suggestions.

The result is a simple tool that mounts on commercially available screw systems and allows exacting movements to adjust vertebra up and down, forwards and backwards with millimeter precision. The researchers have tested their tool in plastic spine models and performed force testing to get an idea of how much pressure it might place on vertebral bones. They recently expanded their tests to cadaver spines with hopes to soon move into clinical trials.

“We’re lucky that we work very well together and have very similar, obsessive personalities,” Wolinsky says of the collaboration. “Hopefully this tool will lead to less pain and problems for patients down the line.”

To see a video featuring Jean-Paul Wolinsky and his work in treating sacral chordoma, visit bit.ly/sacralchordoma or scan the code. To support this research, call 443-287-7942.