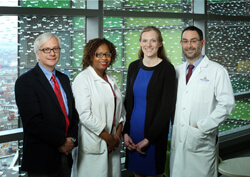 Even though stroke remains one of the leading causes of death and disability in the United States, risk factors remain poorly controlled for most of the population. Only 40 percent of patients with hypertension, or high blood pressure — the most common risk factor for stroke — have this condition under control. The same is true for high cholesterol, not enough exercise and being overweight, say stroke experts. That’s one reason why Johns Hopkins Hospital Stroke Center director Victor Urrutia and stroke nurse practitioner Brenda Johnson started the Johns Hopkins Stroke Prevention Clinic in 2011. More recently, Johns Hopkins Bayview Medical Center Stroke Center’s director, Elisabeth Marsh, and Hopkins Bayview’s director of neurology, Rafael Llinas, started a similar effort, the Bayview Stroke Intervention Clinic (BaSIC), on that campus.

All inpatients for stroke at The Johns Hopkins Hospital are offered appointments weeks later at the Stroke Prevention Clinic, explains Johnson. In the time between discharge and the appointment, a dedicated nurse follows up frequently with patients, so they already know her by name when they come back.

Periodic appointments following patients’ strokes allow Urrutia and his colleagues, including Johnson and clinical fellows who serve the clinic, a chance to educate them about what risk factors led to their stroke and how to mitigate these. Care providers can order customized tests and provide referrals to other specialists, including nutritionists and therapists if necessary.

“They need to know why they had the stroke so we can prevent it from happening again,” Johnson says.

The clinic is already helping retain patients who often get lost to important follow-up care, Urrutia says. From February 2010 to February 2011, before the clinic launched, only about 28 percent of stroke patients seen as inpatients returned for follow-up care within 90 days, a critical period in which stroke risk is still high — a number that increased to nearly 54 percent in 2014. Though they’re still investigating how health outcomes may have changed for the better while the clinic has been running, Urrutia says, increased volume is already a sign of success.

“Just getting patients in can help us help them,” he adds.

Marsh says that the BaSIC clinic also has been able to help an increasing number of patients avoid second strokes — follow-up rates have tripled for stroke patients at Hopkins Bayview, and readmission rates have fallen. Appointments at set intervals at the clinic after discharge allow patients to ask whatever questions have come up since their stroke with experts dedicated to their care, she says. Many patients are relieved to hear that the fatigue and depression they often experience are a typical part of recovery.

Both clinics also allow an unprecedented chance for research, the providers say. Ongoing studies with patient volunteers from the Stroke Prevention Clinic and BaSIC are providing data for Johns Hopkins researchers to learn more about depression, patient and caregiver perceptions of deficits, and the utility of various interventions — information that could eventually help improve care for future stroke patients.

Together, the clinics are helping more patients heal better and prevent future problems. “There’s nothing more satisfying,” says Llinas, “than helping our patients avoid being hospitalized for this same problem ever again.”

The Stroke Prevention Clinic: Before and After

Within 90 days of inpatient treatment for stroke:

28 percent of patients returned for follow-up care in 2011

54 percent of patients returned for follow-up care in 2014

*The 90 days after stroke is a critical period in which risk is still high.