NeuroNow - After Crisis, Giving Back

After Crisis, Giving Back 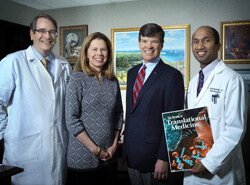 When Kevin and Martha Dunbar sent their son, Michael, back to continue his freshman year at Davidson College in North Carolina after winter break in January 2013 with a cold, they thought nothing of it. Michael was a busy student, reasoned the owners of the Baltimore-based armored truck company that bears their name, likely to pick up a host of germs from dorm life and a hectic schedule. But Michael’s sniffles turned out to be far more serious. Weeks later, they received a call telling them that Michael had collapsed and was being rushed to the hospital. Tests eventually showed that he’d had a sinus infection that migrated to his brain and caused an abscess. What they’d thought was a simple cold would ultimately require three brain surgeries to get under control.

After Michael’s condition was stabilized, the Dunbars were eager to get their son back to their home near Baltimore for further treatment. Michael Hankin, a family friend who also serves on the Johns Hopkins Medicine Board of Trustees, urged them to have Michael transferred to The Johns Hopkins Hospital. Though Kevin and Martha were already aware of Johns Hopkins’ outstanding reputation, their friend’s encouragement was all they needed to make their decision. Michael was soon on an air ambulance to transfer his care to Johns Hopkins.

There, they were met by a care team including Johns Hopkins neurosurgeon Chetan Bettegowda, plastic and reconstructive surgeon Amir Dorafshar, and otolaryngology–head and neck surgeon Masaru Ishii. The team coordinated additional therapy for Michael to further control his infection and repair a portion of his skull that had been removed in the previous surgeries — a must for him to return to college. By the following fall, Michael was back at Davidson to begin his sophomore year, missing just a single semester of college.

“We have a lot of gratitude,” says Kevin. “We have our son in one piece and are so thankful that his team took such good care of him. It just feels natural to give back.”

As a way of expressing their appreciation, the Dunbars have donated funds that will forward the research of all three doctors who led their son’s care. They have also joined the Johns Hopkins Neurosurgery Advisory Board to contribute their knowledge and experience.

Having research dollars from such a personal source is an incredible honor, says Bettegowda. “Much more than the monetary value, to me it’s the highest compliment that patients or their families can give,” he adds.

Bettegowda and his colleagues plan to use their portion of the donation to further their work on what’s often referred to as “liquid biopsies” — tests that will eventually use DNA and other types of biomarkers isolated from blood or spinal fluid to diagnose cancer in the brain and spinal cord and determine how patients’ tumors are changing in response to treatment. Developing these tests will require genetic sequencing and other expensive molecular biology techniques that often aren’t covered completely under the federal research grants that often fund scientists’ work.

“We are incredibly grateful,” says Bettegowda, “that they decided to contribute to our research endeavors.”

To see Chetan Bettegowda discuss his research, visit bit.ly/liquid-biopsy or scan the code. To support his work, call 443-287-7942.