NeuroNow - A Close Eye on Stroke

A Close Eye on Stroke 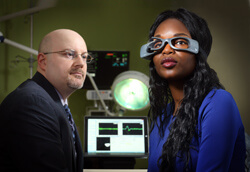 David Newman-Toker is testing video-oculography goggles to gauge whether eye movements indicate stroke and other conditions.

Diagnostic errors are one of the most important patient safety issues, affecting an estimated 12 million Americans each year, more than 150,000 of which result in death or permanent disability. One area particularly ripe for improvement, according to Johns Hopkins neurologist David Newman-Toker, is misdiagnosis when patients complaining of dizziness come to the emergency room to be evaluated for stroke.

Studies show that $9 billion of health care dollars currently goes toward evaluating and diagnosing patients with stroke in the emergency room, Newman-Toker says. However, he adds, about $1 billion of that is wasted on unnecessary CT scans and admission to the hospital for patients who are having benign inner ear problems that don’t warrant these tests and interventions. On the flipside, about 40,000 to 70,000 patients a year have strokes that are initially missed when they come to the emergency room for evaluation, and about 10,000 to 20,000 of those likely suffer permanent harm from this misdiagnosis.

Newman-Toker, who regularly cares for patients with dizziness and stroke, knew that there had to be a better way. Several years ago, he began practicing a diagnostic technique that can accurately differentiate stroke from other conditions that cause dizziness by looking for minute differences in eye movements when patients undergo a battery of bedside tests that takes about a minute: looking for inability to keep the eyes stable as a patient’s head is rotated rapidly to either side, looking for jerkiness as a patient tracks a doctor’s finger to look right and left, and checking eye position to see if one eye is higher than the other.

A 2009 study showed that these simple tests can outperform even more standard clinical tests for stroke, such as MRI. However, Newman-Toker explains, they come with an important drawback: Learning to administer these tests correctly requires months to years of mentorship and can be extremely difficult, even for experts who deal regularly with the brain and eyes, such as neurologists and neuro-ophthalmologists.

But a new development could computerize this process, making the need to painstakingly learn these tests obsolete. In a new study launched in fall 2014, Newman-Toker and his colleagues are testing the utility of a device that looks much like a pair of swim goggles and fits over patients’ eyes to automatically gauge whether patients’ eye movements indicate a stroke, an inner ear problem or something else that requires more in-depth investigation.

The approach, known as video-oculography, isn’t new to science or medicine — researchers and physicians have been using it for years for eye-tracking studies or to diagnose balance issues. However, this is the first time it’s been used as a diagnostic test for stroke, Newman-Toker says. He’s hoping that the new study, which will run through 2019, will demonstrate this device’s utility in reducing diagnostic errors in stroke patients with dizziness.

“My objective here,” he says, “is to save as many lives as possible and do it in a way that brings better diagnostic value to our patients and those at hospitals around the globe.”