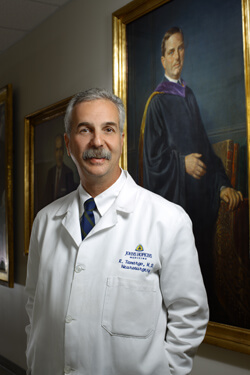 Rafael Tamargo is the Walter E. Dandy, M.D. Professor in the Johns Hopkins Department of Neurosurgery.

When Mary Ellen Marmaduke was a child, her father was just a warm, playful man with a ready smile who really enjoyed his children. She remembers him spending hours playing card games with her and her brother and two sisters, starting with rummy, then moving on to hearts. After a medical meeting in Hawaii, he brought back grass skirts for the girls. Putting them on himself—he needed two to go around his own waist—while playing some Hawaiian records, he showed his family how to hula.

But to the rest of the world, Marmaduke’s father was making his mark in an entirely different way: He was Walter Dandy, a founding father of neurosurgery who revolutionized knowledge of and treatment for hydrocephalus and performed the first aneurysm clipping, ushering in a new era of cerebrovascular neurosurgery.

“I knew that my father was famous,” Marmaduke says, “but I didn’t really understand exactly why.”

Dandy arrived at Johns Hopkins as a second-year medical student, so bright and driven that he finished his first two years of medical school while completing his undergraduate degree at the University of Missouri. With Harvey Cushing and William Halsted as his mentors, Dandy found a passion for neurosurgery, in both the lab and the clinic.

While still completing his training, Dandy published two landmark papers describing for the first time how the cerebrospinal fluid circulates in the brain and what might impede this flow, causing hydrocephalus. This in-depth knowledge helped him treat hundreds of children with this condition who came to his clinic over the years, some whom Marmaduke saw while working as his receptionist in her teens.

Later, Dandy performed the revolutionary surgeries that clipped aneurysms, treating these malformations by cutting off their blood supply. His novel therapy launched new treatments for the sometimes deadly conditions that affect the brain’s blood circulation.

A perfectionist who could become easily angered when patients weren’t cared for to his satisfaction, Dandy was also a dedicated teacher, Marmaduke says. Rather than deliver lectures, he preferred to show his students real-life examples, something he did with his children on a regular basis. When she and her siblings were teens, Marmaduke says, their father would allow them to view his operations while he explained what he was doing.

Such hands-on teaching left a lasting legacy. Marmaduke’s brother, Walter Dandy Jr., followed in his father’s footsteps by becoming a physician himself. With damage to one eye caused by a childhood accident, the younger Dandy wasn’t able to become a surgeon. But he made a name for himself in the field of anesthesiology, establishing the first intensive care unit at Union Memorial Hospital in Baltimore. He died in July 2013 at the age of 87.

The senior Dandy’s legacy continues to reverberate through Johns Hopkins. To honor his numerous accomplishments during his nearly 40-year career here, the school of medicine has established the Walter E. Dandy, M.D. Professorship, held by neurosurgeon Rafael Tamargo. Being the Walter E. Dandy, M.D. Professor has allowed Tamargo, who directs the Division of Cerebrovascular Neurosurgery, to concentrate his clinical work on cerebrovascular and skull base neurological problems and continue his research on the role of inflammation in stroke and the epidemiology of aneurysms and subarachnoid hemorrhage.

“Without the Dandy Professorship, I would not have been able to expand this work that not only benefits my current patients but future patients as well,” Tamargo says. “It is a tremendous honor and a source of great pride to be associated with the name of this great man.”