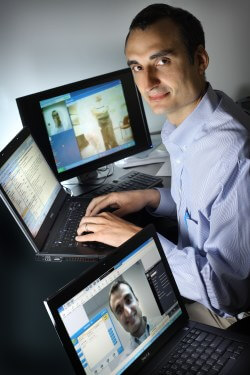 Ray Dorsey, who has started a telemedicine program for Parkinson disease patients, believes that physicians shouldn’t have to discriminate against patients based on their geography.

The grainy YouTube video shows two panels. On the left, an elderly man in a wheelchair alternates between touching an assistant’s hand and his own nose. On the right, a doctor watches the patient from his own computer, nearly 150 miles away. “Good,” says the physician. “Now try the right hand.”

The doctor is Ray Dorsey, the new director of the Johns Hopkins Movement Disorders Center. And the video? That’s Dorsey showing what telemedicine can do for patients with Parkinson disease.

The patient in the video is one of between 400,000 and 500,000 people in the United States who have this condition—a number that’s expected to grow by about 80 percent by 2030 as the population ages. Though most doctors see patients like this one in person in clinics across the country, Dorsey says, the tremors and difficulty in walking that characterize Parkinson disease can make such visits inconvenient at best and harrowing at worst.

Before he joined the Johns Hopkins neurology team in August, Dorsey saw patients at the University of Rochester Medical Center. There, he treated patients from a nursing home located about 150 miles away. For these patients, coming into the clinic could be an all-day ordeal, requiring loading their wheelchairs into a van and driving for hours, sometimes in the snow. Dorsey and his colleague Kevin Biglan decided that there must be a better way.

In a pilot study, the doctors sent inexpensive webcams and video-conferencing software to the nursing home. On a regular basis, they would fire up their laptops, connecting virtually to their patients.

From the comfort of his office, home or hotel room, and with patients in the familiar surroundings of the nursing home, Dorsey would guide them through the simple movement tests involved in physical exams for Parkinson disease patients: touching their noses, tapping their thumbs and middle fingers together, stomping their feet. Based on what he saw on his computer screen, Dorsey could evaluate each patient’s condition and decide whether he or she needed an adjustment in the dosage of levodopa, the medication used most often to treat Parkinson disease.

“Rather than making patients spend the majority of their time just trying to get to the appointment,” Dorsey says, “we could devote that time to actually delivering care.”

The telemedicine model that he conceived is much more patient-centered than the current, in-person method for treating Parkinson patients, Dorsey says: There’s no waiting, no checking in or checking out. This method is also extremely cost effective. The webcam that he used in the nursing home study costs just $25, and the videoconferencing software costs about $150.

“People are spending more than that just on transportation costs on a single visit,” Dorsey explains.

Now that Dorsey is at Johns Hopkins, he’s working to bring telemedicine here as well and to eventually expand its reach to other conditions and other states, so Maryland patients who decide to retire in Vermont, Maine or elsewhere can still keep the same physicians.

“I’m doing house calls like doctors would have a generation or two ago—just in a different way,” Dorsey says. “Although I don’t physically touch patients, this kind of care really touches their lives.”