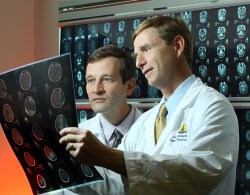 Close relationships between basic scientists and clinical researchers, such as Gregory Riggins and Jon Weingart, could lead to effective new treatments for glioblastoma.

The headlines proclaiming Senator Ted Kennedy’s seizure in the spring of 2008 did little to foretell the course of his grim diagnosis. Just 15 months later, Kennedy had died of glioblastoma, a devastating and fast-moving type of brain cancer. Kennedy’s rapid decline is typical for the majority of patients diagnosed with this cancer. However, Johns Hopkins doctors are working to turn that statistic around. They’re on the forefront of aggressive efforts to develop more effective treatments to help extend glioblastoma patients’ lives.

“Until recently, we never talked about having patients alive two years after diagnosis,” says neurosurgeon Jon Weingart. “Now, we have some patients live three, four or more years. It’s still a small portion of patients, but 15 years ago we had no patients like these.”

To ramp up that percentage, Johns Hopkins leads a group known as the Adult Brain Tumor Consortium—a team composed of several medical institutions across the country that conduct clinical trials for new glioblastoma treatments. One study recently started here is testing a new vaccine against glioblastoma. Rather than acting like a traditional vaccine that prevents infections, this vaccine fires up the immune system to fight existing tumors. It’s made using samples of a patient’s own cancer—a stunning example of personalized medicine at work, Weingart explains.

In fact, he adds, most new discoveries in the works to treat this disease rely on close collaboration between clinicians like himself and lab researchers. Although 20 years ago most research was done using animal tumors, today surgeons remove a patient’s tumor and send it directly to basic researchers to use in their work. “The flow of information,” Weingart says, “relies on a direct connection between the operating room and the lab.”

One of the researchers benefiting from this steady flow is Gregory Riggins. Using samples of tumors that patients have donated, he and his colleagues have identified genes that are often mutated in glioblastoma tumors. The functions these genes control may make effective targets for new drugs on the horizon.

Gaining a better understanding of what makes these tumors tick could also help identify old drugs that might treat glioblastoma. Riggins and his lab are testing various drugs that have an established safety record in people to see which ones make a dent in glioblastoma cells in culture. But rather than testing a single drug at a time—the way most disease studies are run—Riggins is using the drugs in combination, a strategy that could make an end-run around the various ways tumors thwart treatments.

“Glioblastomas seem to have a built-in resistance for certain types of blockades,” Riggins says, “but we’re looking for combinations that can knock these barriers down.”

“The progress over the last five years in this field has been dramatic,” he adds, “and things are only getting better all the time.”