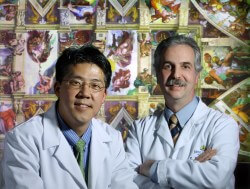 Art and medicine have quite a bit in common: Training in either discipline can give the practitioner an eye to see what others often don’t. It’s that training that helped medical illustrator Ian Suk and neurosurgeon Rafael Tamargo discover something new about Michelangelo’s famous frescoes on the ceiling of the Vatican’s Sistine Chapel. Last May, Suk and Tamargo announced that one of the paintings, the depiction of God in “Separation of Light from Darkness,” shows evidence that Michelangelo had slipped in covert images of a brainstem and spinal cord.

Art historians have long debated the unusual features that appear in this rendering of God. Though the vast majority of Michelangelo’s figures in the Sistine Chapel frescoes look anatomically correct and true to life, God’s neck in this particular painting appears lumpy, with his beard awkwardly curling upward around his jaw.

Michelangelo is known to have dissected numerous cadavers starting in his teenage years. These anatomic studies helped him create extremely accurate depictions of the human figure in his sculptures and paintings.

“Michelangelo definitely knew how to depict necks—he knew anatomy so well,” Tamargo says. “That’s why it was such a mystery why this particular neck looked so odd.”

To investigate, Tamargo enlisted Suk’s help. Together, they realized that the unusual features in the neck strongly resemble a brainstem, the portion of tissue at the base of the brain that connects to the spinal cord.

“It’s an unusual view of the brainstem, from the bottom up,” says Suk. “Most people wouldn’t recognize it unless they had extensively studied neuroanatomy.”

Suk adds that the strategically placed brainstem might also explain another unusual feature of the painting. In this same image, God is depicted in a red robe with an odd tubular structure in the chest. Although God wears the same red robe in three other Genesis frescoes in the Sistine Chapel, this tubular structure is absent elsewhere. The structure has the right placement, shape and size to be a spinal cord, say the researchers, suggesting another piece of hidden anatomy in the artwork.

Tamargo and Suk explain that if their proposition is correct, it wouldn’t be the first time that such concealed anatomical depictions have been proposed to exist in the Sistine Chapel’s ceiling. In 1990, Frank Lynn Meshberger, an obstetrician based in Indiana, published a paper suggesting that the shroud surrounding the image known as the Creation of Adam strongly resembles an anatomically correct brain.

“It looks like the central nervous system may have been too good a motif to use only once,” Tamargo says.