A watershed time for pediatric hydrocephalus 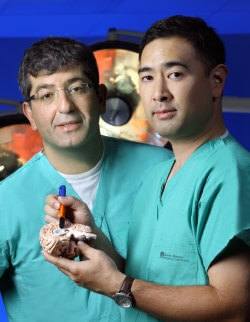 The spinal fluid that naturally circulates in and around the brain is vital for health, bathing the organ with nutrients and keeping it hydrated. But in patients with hydrocephalus, there’s literally too much of a good thing.

Translated as “water on the brain,” hydrocephalus occurs when the channels and gates that keep spinal fluid efficiently flowing become blocked. As the pent-up fluid increases, pressure escalates within the skull—a situation that can be especially dangerous for children.

Untreated pediatric hydrocephalus can lead to developmental delays, intellectual disabilities or even death. Unfortunately, this condition is common, affecting one out of every 500 children at birth and developing in more children during infancy and toddlerhood.

The good news, says pediatric neurosurgeon George Jallo, is that it’s treatable.Over the years, Jallo has seen some excellent innovations arise that are aimed at helping children with this condition survive and excel. One advance that’s had a tremendous impact is using catheters impregnated with antibiotics.

In 2002, Johns Hopkins began using only the antibiotic-infused catheters for pediatric hydrocephalus. These catheters are a pivotal part of shunt systems, which are the most common treatment used to route excess fluid away from the brain. Without antibiotics, a significant fraction of shunts become infected, says Jallo’s colleague Edward Ahn.

“If a shunt becomes contaminated,” says Ahn, “the entire system has to be removed. Children require additional hospital stays and more operations.”

Since the hospital made the switch to antibiotic-impregnated catheters, he adds, infection rates for pediatric hydrocephalus patients at Johns Hopkins have been cut by more than half.

Another advance that’s had a huge effect on patients with this condition is the programmable shunt, Jallo says. Though shunt systems are meant to be long-term, the amount of fluid that circulates around the brain changes as a child grows. Doctors can set a shunt to drain an average amount of fluid, but their estimate may not be accurate, he explains.

“Sometimes shunts work too well, he says, “and sometimes they don’t work well enough. They’re not physiologically accurate in the sense that they drain only excess fluid—they just drain a constant amount, regardless of the real situation.”

To correct this problem, Johns Hopkins now uses shunts that can be programmed from outside the body, using magnets applied to a patient’s scalp, to pull out various amounts of fluid based on a patient’s unique needs. These shunts last longer than the older, non-programmable ones, sparing patients additional surgeries to correct for too much or too little draining.

The most exciting developments, Ahn says, are those that could lead to avoiding traditional shunts altogether. He and his colleagues have recently implemented a new treatment for hydrocephalus in premature babies, who develop the condition at a higher rate than average and are too small to receive standard shunts.

Rather than traditional means of removing fluid repeatedly with a needle, the surgeons instead use a tiny shunt that drains into a reservoir just beneath the baby’s scalp. Though the majority of these babies will eventually need the traditional shunt when they grow older, many will never need another intervention.

“Now,” Ahn says, “we can treat these babies so that they can outgrow their hydrocephalus and never need a shunt at all, which is a tremendous victory.”

He and Jallo say all these innovations are just the tip of the iceberg—they and other researchers at Johns Hopkins and elsewhere continue to develop new ways to make shunts more dependable and long-lasting and, eventually, to erase any evidence that patients had pediatric hydrocephalus at all.

“Our hope is that people who have this condition can live normal lives,” Ahn says, “and not feel like they have a chronic, long-term disability. We have a long way to go, but we’re making amazing progress.”