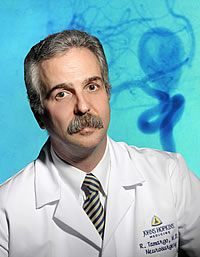 Rafael Tamargo: “You have to have lots of experience with aneurysms to be able to tackle the big ones.”

Rafael Tamargo, director of cerebrovascular neurosurgery, treats a wide range of vascular problems in the brain, but the surgeon’s specialty is aneurysm, the dangerous ballooning of an artery that can burst and kill or leave its victims with devastating brain damage.

Tamargo works with a team of neuro-interventional radiologists, neuro-anesthesiologists, neurosurgical nurses and others who treat aneurysms using one of two methods: microsurgical clipping or endovascular coiling. They treat about 170 brain aneurysm patients each year, including several children and, increasingly, older adults in their 70s and early 80s. Few other centers have volumes like these; none have reported better results.

Tamargo is considered a world expert in clipping giant aneurysms under hypothermic cardiopulmonary bypass. He is also a pioneer in the contralateral approach, in which aneurysms in both hemispheres are clipped during a single procedure, and an innovator in wrapping unclippable aneurysms with cotton and fibrin glue.

Here, he talks about the care his team delivers, beginning with the aneurysm surgeon’s race against time.

Clipping one of these giant aneurysms is like fixing a time bomb. It can explode before you actually have time to diffuse it. So we do some of these cases under cardiopulmonary bypass. The body temperature is lowered to 15 degrees C, allowing the blood flow to the brain to be stopped for up to one hour without causing any deficits.

It buys me time. With the blood flow reduced, the aneurysm becomes softer. I can look around. I can see which blood vessels are coming into it, which ones are coming out, what other structures are in the vicinity. Then we develop a plan for how to clip the aneurysm.

You have to have lots of experience with aneurysms to be able to tackle the big ones. These giant aneurysms eliminate all normal anatomy and displace everything. When we open up, the whole area we expose is aneurysm. It can be like walking into a house you’ve never been in before. The lights go out; you have no floor plan, nothing. Only by seeing hundreds of aneurysms can you develop a plan, a blueprint. You know where things are supposed to be; you know where things need to go back to.

It’s incredible, but it’s a fact: 30 percent of people with a ruptured aneurysm present to a medical system and are sent back home with a diagnosis of headache. Our doctors here in our emergency department are very good at picking up these patients. With advanced CT imaging and angiograms, we can make definitive diagnoses.

What we fight after surgery for ruptured aneurysms is vasospasm, which one third of patients develop. The treatment, hypertensive hypervolemic therapy with as much as 30 liters of fluid a day, is very complicated and we can deliver it in our neurosciences critical care unit.
Our NCCU is one of the few units in the country entirely devoted to neurosurgical and neurological problems.