NeuroLogic - From the Clinic to the Lab, and Back: Metastatic Melanoma

From the Clinic to the Lab, and Back: Metastatic Melanoma

A therapeutic vaccine and radiation in patients with metastasized melanoma in the brain. 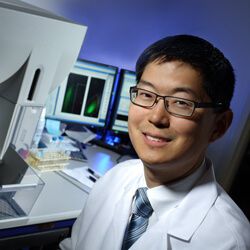 Michael Lim and his colleagues recently opened up a clinical trial to test the combination of a new therapeutic vaccine and radiation in patients with metastatic melanoma.
photo by Keith Weller

At Johns Hopkins, laboratory research and clinical care are a two-way street—questions that arise in the clinic become targets for research, and findings from research circle back into potential new treatments for patients. That’s exactly how Michael Lim’s latest clinical trial got started.

The Johns Hopkins neurosurgeon treats patients with many kinds of cancers in the brain and spinal cord, both those that arose there and those that arrived from elsewhere through metastasis. He also studies many of these same cancers in the lab. While caring for patients with melanoma that metastasized to the brain, Lim noticed that a subset of brain tumors that were irradiated developed a robust inflammation in this area.

At the time, he was also studying a family of cancer drugs known as checkpoint inhibitors. This class of immunotherapies targets molecules on the surfaces of cancer cells that effectively shut off the body’s immune response, allowing these cells to evade death and proliferate unchecked. Two particular checkpoint inhibitors, antibodies against the proteins PD-1 and CTLA-4, have shown promise in helping extend survival for several different types of cancers. However, neither of them alone has proven to be a cure.

Because the inflammation Lim saw in the clinic in irradiated patients indicated an immune response, he wondered whether combining radiation with one of the checkpoint inhibitors might deliver a one-two punch to patients’ cancers, providing a more effective therapy than either modality on its own.

To test his idea, he first looked at a mouse model of glioblastoma, an aggressive primary brain cancer that’s proven particularly resistant to treatment. Exposing these animals to radiation and to PD-1 produced a significant number of long-term survivors—animals whose cancer never reappeared. Even more remarkable, when Lim and his colleagues reinjected the treated animals with tumor cells, they remained cancer-free. “It showed us that their immune system was now trained to kill cancer,” he says.

Since antibodies against CTLA-4 are FDA-approved to treat melanoma, but antibodies against PD-1 aren’t yet, Lim and his colleagues repeated the experiment using CTLA-4 in a mouse model of metastatic melanoma. These results were similarly exciting, Lim says.

The lab studies combining radiation and CTLA-4 have been so promising that Lim and his Hopkins colleagues, including Evan Lipson in medical oncology, Lawrence Kleinberg in radiation oncology and Xiaobu Ye in neurosurgery, recently opened a clinical trial to test the effects of this combination in patients with metastatic melanoma.

“We’ve been very encouraged by what we’ve seen in the lab,” Lim says. “We hope that our trials will change the natural course of this disease in a positive way.”